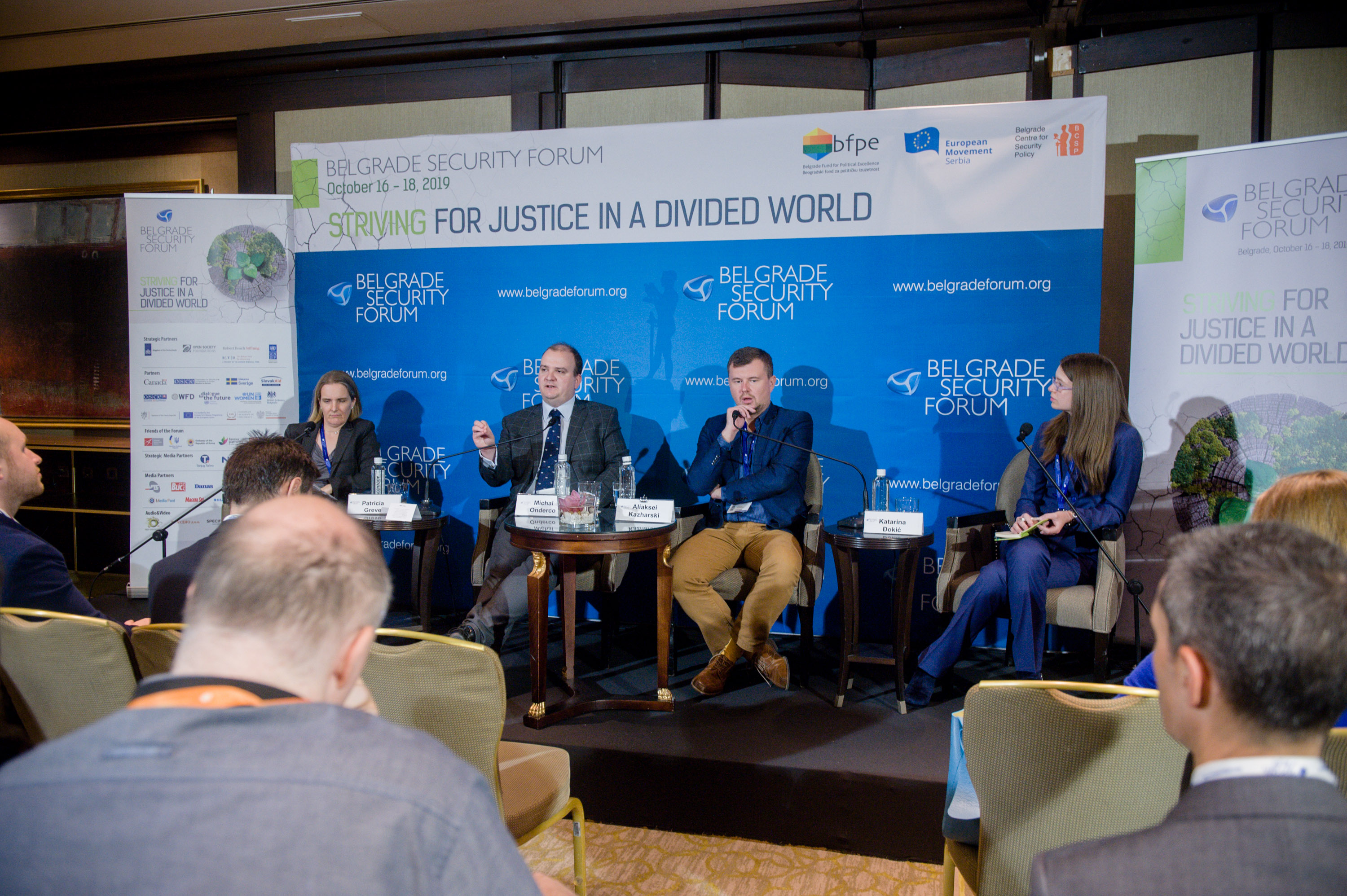 Academic panel titled Regional Security and the Retreat of Liberalism in Europe saw the discussion on the security of the European Union in context of nuclear treaties, as well as the internal relations and the issue of enlargement.

Dr. Michal Onderco, Assistant Professor of International Relations at Erasmus University Rotterdam, explained the connection between ontological and regional security, highlighting the connection between the retreat of liberalism and the end of the Intermediate-Range Nuclear Forces Treaty (INF) treaty. He points out that the Treaty solved two main issues for Europeans.

‘First and foremost, it solved the question of security with regards to the USSR, but also it was seen as a positive on an ontological level due to the high dissatisfaction of the European public towards the proliferation and presence of nuclear weapons on the continent,’ he said, adding that ontological security is predicated on the assumption that the individual is creating his environment in which he feels secure, or rather that the state creates such an environment for its citizens.

Dr. Onderco then asked a rhetorical question… ‘what if the metaphorical bubble, the safe environment, bursts?’ Suddenly, the European Union found itself unsure of the two things this treaty ensured. The first was that America cared, and second was the EU has to focus on normative power. But with the collapse of the INF treaty and EU calls for the US to still abide by it (which he found absurd), the EU has rallied around the NATO flag, which this speaker also found non-sensical since NATO is predicated on the concept of the US engagement in the European continent.

He concluded by saying that “It’s a sad story. It’s a story of an idealist in a realist world!“

Dr. Aliaksei Kazharski, Comenius University in Bratislava (Slovakia) presented findings of his work on Hungarian and Russian “sovereign” and “illiberal” democracies. He points out that two adjectives are the focus of his work, that comes out of (by his own admission) morbid fascination with how Russia and Hungary comprehend democracy. He described both countries as neo-feudal or mafia sates (term”post-communist mafia state” by Balint Magyar). The aim of Dr. Kazharski’s research was to understand the social superstructure of these states.

He points out that the idea of sovereign democracy comes from a narrative (in Russia) of the “occupation” by Western forces and their agents during the 90s, and foreignization of the Russian state by its people. Similarities with the Hungarian scenario of resovereignization by President Orban were also noted. Both, he said, were populist lines.

“It took Russia eight years to go from the slogan of ‘our government is sovereign’ to the slogan ‘Crimea is ours’”, he said, pointing out the quick action of this alternative view of democracy in Russia. He also warns of the possibility of regionalization of the mafia state, meaning the expansion of this concept.

To the additional question by the moderator on the particular “peacock game” Orban is playing with the EU, Dr. Kazharski answered that the name of the game is compromise, where the authoritarian government chooses what norms of the EU it will agree upon without loss of their own interests.

Dr. Patricia Greve, University of Toronto, focused on regional security governance, identity dynamics in security communities, transatlantic relations, and US and German foreign policy, presented her academic paper on the relationship between two puzzles-Politicisation and Enlargement.

‘Not much has changed in the sense of meaningful steps towards enlargement’, she said linking this to the politicization of the EU and its policies. At first, she points out that politicization is, theoretically, a good thing, but that it effectively was the opposite of desire. It introduced strain on domestic politics, meaning that there was a rapid depoliticization of EU enlargement. While the idea of enlargement used to be linked to the idea of social, political and democratic reform as well economic reform, it is now side-lined and even outright stopped and looked at in a pragmatist way. Dr. Greve points out that the enlargement issue was so depoliticized that it was hardly mentioned in 2019 EU elections.

Finally, she concludes by pointing out that these moves will destroy enlargement support in the countries that are in the candidacy program, and that the change is needed.

Questions were too numerous to reproduce here, but it is important to state the often mention point of democracy and its dependency on the EU. To this, Dr. Kazharski offered a pessimistic view. He said that the EU has limited capacity to improve democracy, but is still its main safeguard.