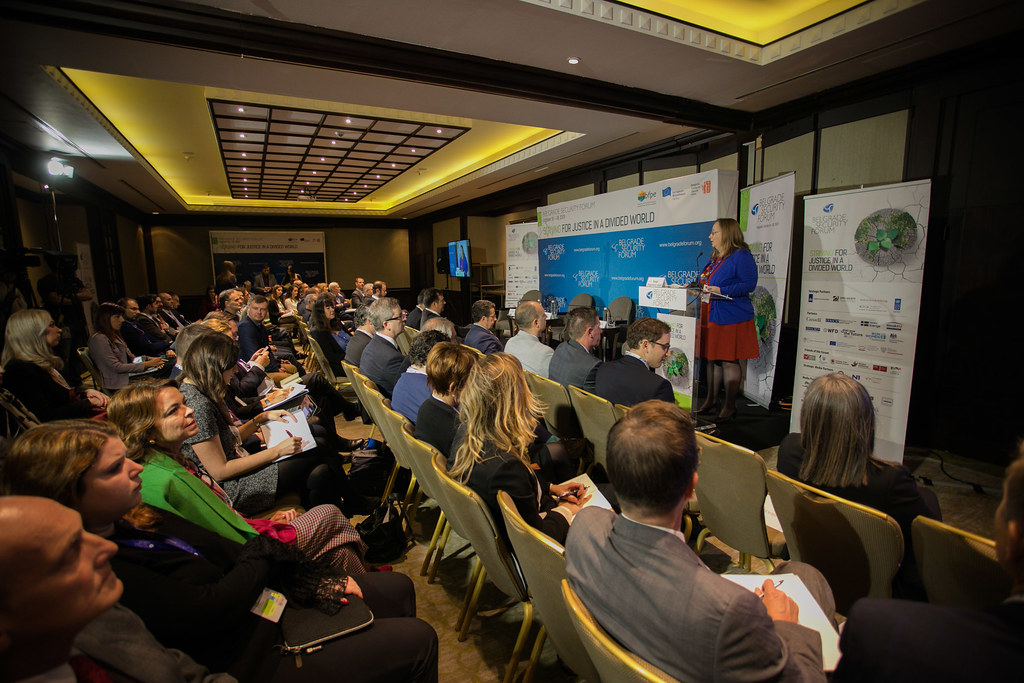 Sonja Stojanović Gajić, Director of the Belgrade Centre for Security Policy (BCSP), was the first to wish a warm welcome to the Academic Event on the behalf of the Belgrade Security Forum organizational team.

“The academic part of the forum has become a trademark of this conference and its aim since the beginning has been to create an opportunity for exchange in dialogue between the academics and policy makers, journalists and people that usually would not have the patience to listen to academics or ask them questions,“ Stojanović Gajić said.

She highlighted that it adds significant value to the forum as it engages with burning issues like regional security dynamics, migration crisis etc. The topic of this years’ academic event will be tackling a burning issue concerning the crisis of European values and norms as we know it.

Ambassador Andrea Orizio, Head of the OSCE Mission to Serbia, presented the most important values of the OSCE that make the organization what it is.

“OSCE itself is a very special animal, it is an organization, but it is not an organization, it does not have member states, but participant states. It is more of a permanent conference. They work on the basis of partnership with all stake holders, ownership and vision. They have a soft way of working, but their soft power is the one which is left going deeper into essence of what the rule of state is,” he explained.

The essence of the assistance is rule of law, taking on a holistic approach so that the countries are influenced by their neighbours. The most important part of their work is including civil society and youth in their projects. That way they are adapting to the needs of the citizens.

Professor Ian Manners, (Uni. of Copenhagen), who works at the nexus of critical social theory and the study of the European Union in planetary politics, started off by questioning the main concepts concerning the topic – What do we mean by liberalism? What do we mean by the EU, crisis, normative power, international security and international community? Liberalism has been dominant for the past 70 years, but recent issues have posed a question, is liberalism in retreat?

A survey by Freedom House was presented, which argued that in the past 13 years, the world has become less free.

“We are witnessing a loss of democracy, loss of freedom of speech, loss of human rights, loss of political rights” Manners assessed.

He pointed out 3 tendencies: 1) the decline of liberalism; 2) the rise of authoritarian nationalists; 3) the rise of neo-liberalism, which he defines as privatisation of public life. Liberalism in its purest sense- the idea of freedom- is in retreat, but in the sense of freedom of the market- the dominant portrayal of behaviour of corporate activity- neoliberalism continues happily on its way.

He continued to examine what kind of an actor the EU should be in the 21st century. The EU has been and continues to be in crisis, not simply a democracy or migration crisis, but it continues to sow the seeds of its own crisis by perpetuating inequality within the context of neoliberalism. ‘So what should the EU be doing in this situation of retreat of liberalism?’ Manners sees the solution in normative power. Normative power is the ability to shape and define norms, but does not mean forcing someone to do something. Normative power is actually a promotion of peace, but peace and prosperity are not enough.

“What we need is solidarity, as it is the most necessary ingredient of power. The EU citizens are unified around the idea that it should deliver peace, and if the EU is still to matter it should strengthen solidarity from “I” to “us”,” he said.

Therefore, the way Manners sees the solution when it comes to the EU managing this issue of the retreat of liberalism, is defining what makes us ontologically insecure, addressing real security issues while taking on a planetary approach. The EU failed with migration crisis, but still has the issue of climate change to tackle at the global level.

Therefore, the way Manners sees the solution when it comes to E U managing this issue of retreat of liberalism, is defining what makes us ontologically insecure, addressing real security issues while taking on a planetary approach. The EU failed with migration crisis, but still has the issue of climate change to tackle with at the global level.