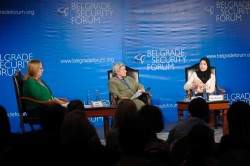 The ‘Women and the Crisis’ panel involved a broad set of viewpoints from panelists with very different occupational and regional backgrounds. The discussion of the differences between women’s approaches to conflict and crisis, and the ways in which conflicts and crises affect women, was multifaceted and pointed.

Sonja Lokar began the panelist remarks, discussing among other things the Slovenian case and noting that the Euro-crisis had a more severe impact on women than on men. Citing decreases in things such as maternity leave periods, public sector wages (more women are employed in the public sector) and food subsidies. Resolving the economic crisis is thus also important to improving the situation and status of women.

Alaa Murabit confirmed the pervasiveness of global phenomena such as the financial crisis, noting that crises are by nature very interconnected, thus affecting all sectors. Libya during the recent revolution was an extreme example of this, as cities emptied of men-at-war were being run almost completely by women, which in Libya was not a common role for women in society. Women rarely even featured in public.

Ismat Jahan continued in this vein, stating that gender relations are certainly more pronounced during times of crises. Crises can change gender roles considerably, and in many crises women are not only victims but sometimes perpetrators, although gender-based violence is more pronounced against women during all kinds of crises, not just conflicts but also including natural disasters and, as other speakers pointed out, economic crisis.

The Q&A was impassioned and both audience members and panelists raised important and challenging questions. Many topics were covered, including but not limited to: the need for more parity in all influential sectors such as banking, and not just in government; the fact that having women in positions of leadership does not automatically mean that peace will follow—women are also constrained by geopolitics; the need to make governments more accountable and demanding for gender integration and gender-based issues, rather than only building normative frameworks for these things; the portrayal of gender issues in countries such as Saudi Arabia as being based on Islam rather than on the patriarchal authorities.