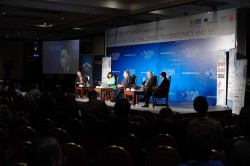 How are issues related to the economic crisis related to security issues? Is there a way for crisis to actually provide a chance to improve human security? These are some of the main questions posed during the second plenary panel of the third day of BSF 2012.

Professor Mary Kaldor explained that during a time of individual insecurity, the crucial step is extending the rule of law. This primarily means that governments should cut their defense spending; otherwise the uncertain situation we are going through can become very dangerous. The European Union Member States have to act together in this age of uncertainty, mainly because the nature of the crisis is largely political.

On the same note, Amb. István Gyarmati warned that Europe is in serious economic and political decline as a result of a crisis in liberal democracy itself. The best indicator of this crisis are the people who live in the EU Member States who seem to be more and more alienated from the system and who express growing euro-skepticism. Mr. Gyarmati explained that the world we live in is very chaotic and that sometimes all we can do is learn how to live in it and adapt to it, rather than persistently try to change it.

The crisis has had a particularly strong effect in the Balkans region, where human insecurity is already elevated. Unemployment in the Balkans is rapidly increasing and, in spite of growing freedom of expression, improved education and health systems, the economic crisis has made people insecure and displeased with the countries in which they live.

Remzi Lani, Director of the Albanian Media Institute, specifically addressed the youth as the most important part of society, who tend to leave their countries to study and work abroad. He said that of all Albanian students who leave Albania to study abroad, only 10% come back to live in their home country.

On the other hand, Radwan Ziadeh referred to the results of the internal institutional crisis in his country, Syria. The difficulties of building a democratic state has led to a more widespread crisis of society and government and, worst of all, violence in the country is increasing daily. Ziadeh expressed pessimism about solving the Syrian crisis and a possible end to the violence without support from the international community, such as through the imposition of a no-fly zone.

To sum up, these grand moments in the transition of institutions and the economy represent a huge challenge for both the societies and the governments who have to face this situation in order to avoid disintegration and quiet the popular disenchantment that has been so influential in stimulating societal transition itself.