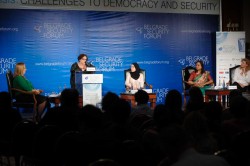 Sonja Licht, Director of the Belgrade Fund for Political Excellence, addressed the audience of a few hundred in the Hyatt Belgrade’s Crystal Ballroom with a few short, poignant remarks.

enty one years ago, a conference was held at the symbolic Hotel Yugoslavia in Belgrade, now a relic of Serbia’s federated past. That conference marked a milestone in the progression of the Balkans politically, economically and socially—the conference focused on the dissolution of Yugoslavia and the integration of Europe. Since that time, the Balkans has come to take on many of the aspects of integration portended by that meeting. Europe, however, in the meanwhile, has in the last few years come to face many of the same questions posed by the infamous process of “Balkanization” that the region has infamously made popular. The model of European integration, Mrs. Licht prescribed, is good, and efforts should be made for both the current Union and its acceding periphery to continue on the path of integration.

Mrs. Licht used the second part of her remarks to thank the Belgrade Security Forum’s partners, donors and organisers, and extended a call to politicians and decision-makers for whom the conference’s sessions would be useful, to reconceptualise their policies and practices using the considerations raised throughout the weekend.