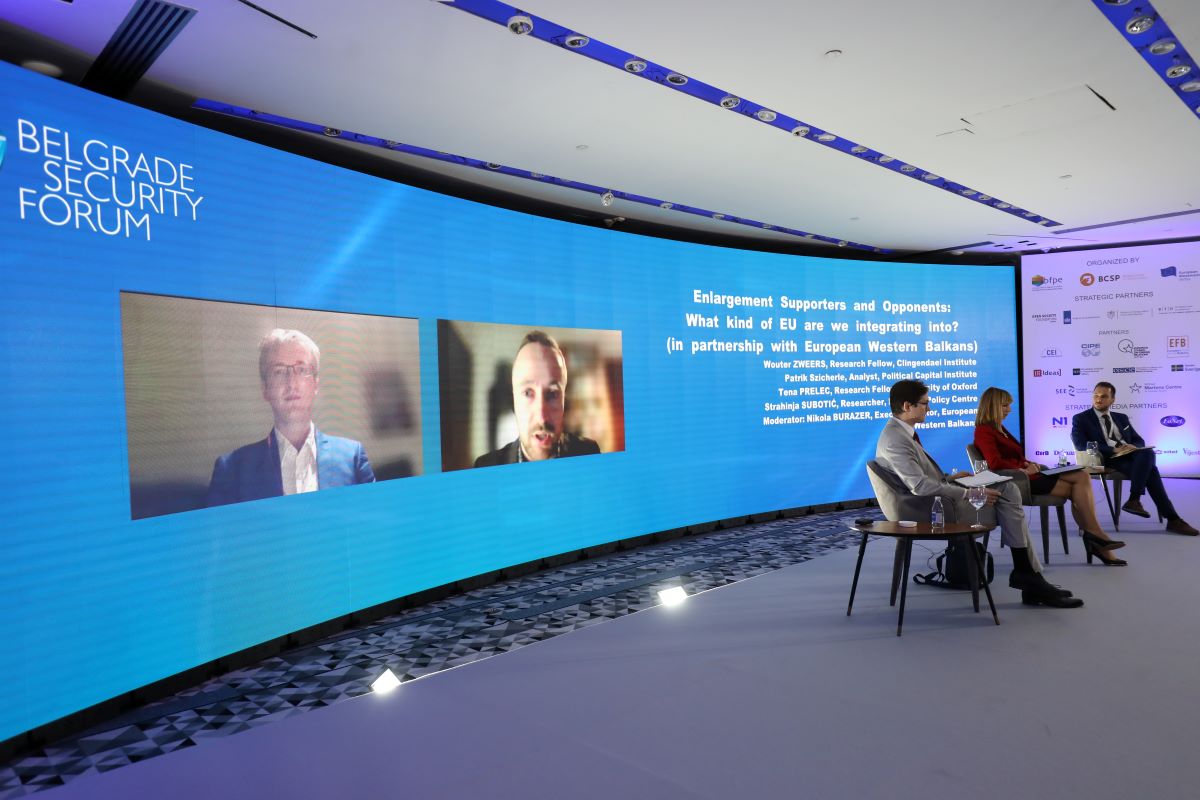 At the BSF partner session dedicated to the EU enlargement supporters and opponents, Mr. Wouter Zweers, Research Fellow at the Clingendael Institute explained that the Netherlands is questioning further integration of the EU due to different fears – migration, competition on labour market etc. However, the EU is going in the direction that the Netherlands does not see as proper. He added that mainstream parties have become EU skeptical and that skepticism about further integration is translated to enlargement process. Enlargement process is also affected by conflict about the rule of law, and some of the stereotypes on the Western Balkans are still alive in the Netherlands.

Mr. Patrik Szicherle, Analyst at the Political Capital Institute stated that Hungary has interest in supporting EU enlargement to the Western Balkans, because Orban needs allies that will support him in the EU. He added that more governments that back Orban’s views will give him more power on the EU level negotiations.

Ms. Tena Prelec, Research Fellow from the University of Oxford spoke about liberals’ (un) interest in EU enlargement. She said that this topic is not even in top 10 issues in the EU. She added that prodemocratic voices that care about the rule of law and reforms in the Western Balkans are currently muted. While focusing on Hungary, she pointed out that there are similar problems within the EU and the Western Balkans (such as Pandora papers, migration etc.). Autocrats are learning from each other, so the EU has to enhance mechanisms of conditionality. She went to add that while authoritarian regimes appear stable, they are more like a pyramid scheme actually – if we take out a few bricks, the whole structure will crumble. Ms. Prelec concluded that Hungary has taken over UK’s role on the Western Balkans, because UK was propagator of enlargement to this region. But the UK’s model was different than Hungary’s. Since enlargement is not a pressing issue at the moment, Hungary has filled the vacuum created by Brexit.

Mr. Strahinja Subotić, Researcher at European Policy Centre explained why support from illiberal regimes in the EU was important to Serbia. For instance, Hungary’s support to Serbia is counterproductive because it creates an illusion that Serbia is ready for EU accession (by creating narrative that Serbia is reformed), but on the other hand Hungary’s support to Serbia affects opinion in the EU that Serbia will have to return favor to Hungary by joining the club of illiberal countries (Visegrad group). Strahinja Subotić pointed out that Brdo declaration is the first document that contains the term ‘enlargement’, instead of ‘European perspective’ terms. He sees it as very encouraging that the EU requires from the Western Balkans to acknowledge EU assistance and presence in the region. Mr. Subotić concluded that the EU has learned a lot from previous enlargement, but the EU is not the same, so enlargement is not the same either.

During the Q&A session a closeness between Oliver Varhelyi, European Commissioner for Neighbourhood and Enlargement, and Viktor Orban was brought up. Panelists agreed that Varhelyi is not always a neutral actor, but member states make their own assessment on country readiness for accession. Also, panelists had remarks about Russia and China influence on enlargement. They agreed that it is not Russia and China who pressure Serbia, it is Serbian government who wants to use these countries’ influence. Too much pressure from the EU won’t push the Western Balkans towards Russia and China and strengthening of cooperation might be the answer to prevent further interference.