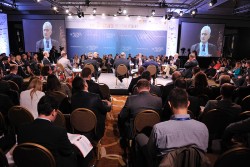 In order to become an integrative part of the EU family, it is necessary to implement all the European values, to include youth and work on the improvement of the educational system. It needs to be kept in mind that the lack of clear EU perspective would lead the Region to Balkanization of Europe.

Christian Danielsson has emphasized that it is of great importance to take step by step approach during the process of acceleration and use all of the potential to continue and commit further to regional cooperation. In accordance with this, Mladen Ivanić stressed out that ordinary people have to feel distinguishable benefits in order to develop further regional cooperation.

On the other hand, Dejan Jović mentioned recent events concerning the refugee crises between Serbia and Croatia elaborating that both countries are trying to make use of it, by showing their recent positions, Croatia as a member of the EU, and Serbia as a country with changed image. This crisis produced by the EU has exported tensions in this region and disturbed mutual relations between countries.

Brussels Process has helped improvement of the relations between Serbian and Albanian Prime Ministers, which reminded us on the Stability Pact in new edition and in different circumstances, said Remzi Lani.

“If we want to build democracy in this region we need to learn how to compromise”, underlined Ramadan Ilazi. In order for this region to become an integrative part of the EU, it is necessary to fulfil all the conditions concerning market economy, so it could become an asset to the EU family, emphasized Malazogu.

In accordance to speeding up of the EU integrations of the region, Alex Roinishvili Grigorev said that it is necessary to include civil society organizations in order to further promote European values. Hedvig Morvai also recognized the need to continue the work on the regional cooperation, but more important to focus on how to build the trust among ordinary citizens.

At the end, Sonja Licht raised the question whether civil society organizations put enough effort in the process of the EU integrations. She stressed the importance of the need for the political elite to be aware, to think in advance and to be more responsible towards European future.