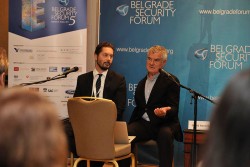 The participants of the Book Presentation:The European External Action Service: European Diplomacy Post-Westphalia had a wonderful opportunity to hear all about the newly released book on european diplomacy, which was presented by the editors Davis Spence and Jozef Bátora. The book reviews the origins and institutional history of the diplomatic apparatus of the EU with a fresh perspective, and questions new organisation of the EU’s foreign policy and diplomacy.

By offering the most comprehensive and profounf set of analyses of the EU’s diplomatic order, the book addresses the implications that change dynamics can have for the ’Westphalian’ diplomatic order and the emerging post-Erstphalian patterns in its diplomatic system.

Several important questions have been raised during the presentation and dicussion which followed, such as the inefficiency of ’classical’ ministries of foreign affairs, as well as the role that the European External Action Service can play in promoting the EU and its image in the times of crisis. The authors pointed out that the book was created not solely for academics, but as well for the European diplomas, therefore combining various components relevant for EU’s diplomacy, from the analysis of EEAS structure, to the issues such as gender equallity in EU’s diplomacy or the position and role of public diplomacy.

The book The European External Action Service: European Diplomacy Post-Westphalia by Jozef Bátora and David Spence, was published by Palgrave earlier this year.