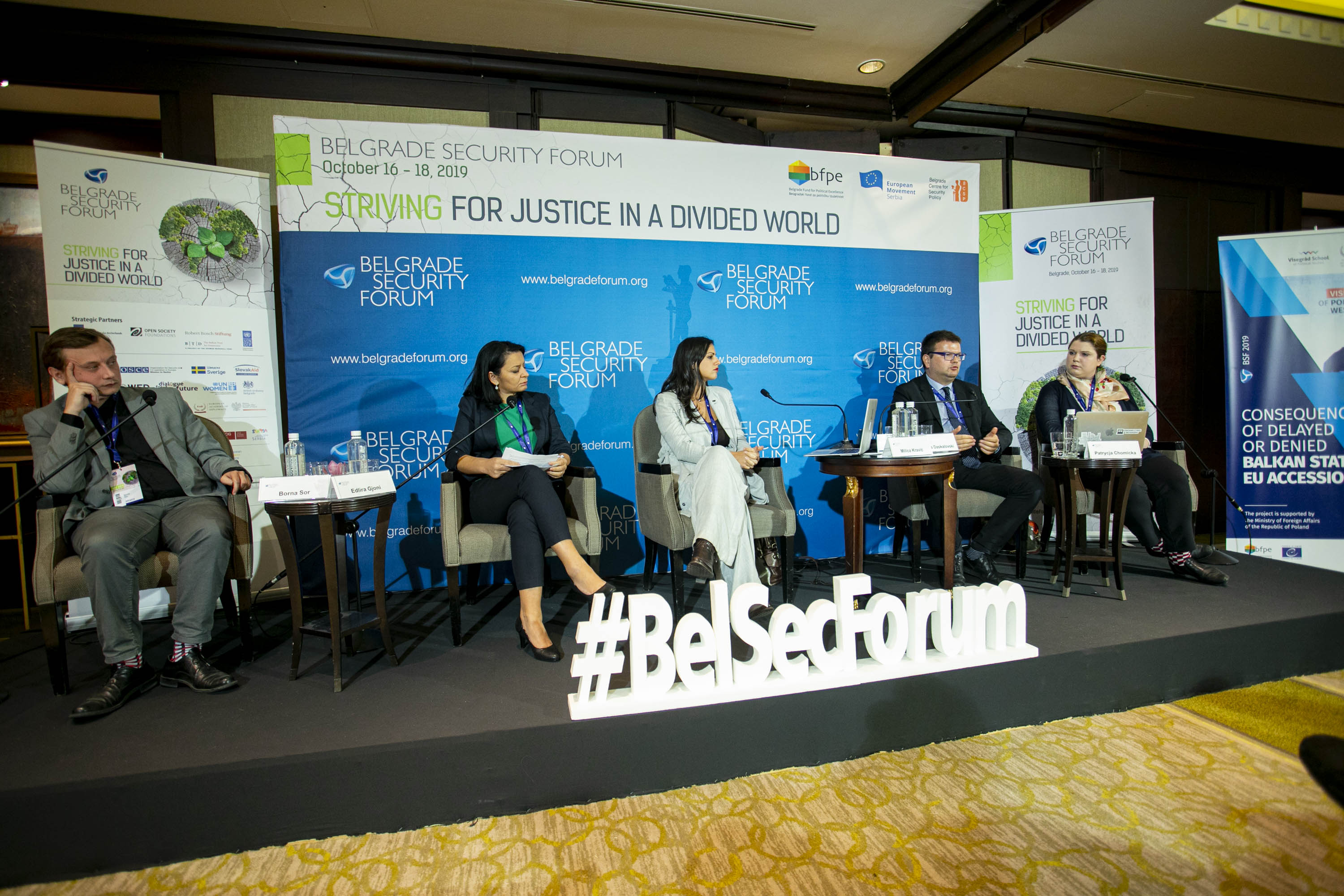 All counties of the Western Balkans are proceeding towards a full European Union membership, although at different levels, be that as an candidate country like Serbia and Montenegro, or awaiting the accession talks like Albania and North Macedonia. This process which kept societies and politicians in the region motivated to pursue democratic and economic reforms, rule of law and the fight against corruption for decades, however seems to be slowing down for the last year. This was the setting for the side event Consequences of Delayed or Denied Balkan States EU Accession prompting the moderator Partrycja Chomicka, Head of the Warsaw Security Forum Organising Committee, to question if this visible slow down could have impacts to the region’s commitment to reforms and the patience of its societies. These worries were widely shared by the participants of this panel.

Milica Kravić, journalist at the Public Broadcasting Service of Vojvodina in Novi Sad, Serbia, stated out first that it is an important for the region not to feel left out by the European Union. Outstanding issues like minority rights are improving since the start of the accession process, however, there are still grave problems in Serbia like the disrespect of the rights of LGBTI people, as well violence against women.

Edlira Gjoni, journalist and CEO of the Centre of Public Impact in Tirana, Albania, focused on the Albanian perspective after just being rejected for the 11th time for EU accession talks. The feeling of unfair treatment, rejection and being second-class-citizens of Europe is on a rise again. As a country which has seen large support numbers of its population for an EU accession, mistrust against the EU is growing as well. For Gjoni this is worrying, especially with regards to the large amount of youth living in the Western Balkans, suffering the most the delays.

Borna Sor, journalist and CEO of Hahar Productions based in Zagreb, Croatia, pictured a basic problem in the communications of political decision makers and the society: with the use of terms like “Western Balkans” or “Berlin Process” which he sees as technical language, people of the region are struggling to catch on to the political discussion about their own EU accession.

His perspective of Croatia as a member state which joined the EU six years ago, was heavily burdened by the fact that the motivation of meeting the criteria for the EU membership fell apart just after joining, without the pressure of Brussels which has been there during the accession process.

Zhidas Daskalovski, professor at the Faculty of Security in Skopje, North Macedonia, mentioned that the current accession process itself is not helping the countries of the Western Balkans to understand their main problems. Supportive instruments like the Berlin Process, intended to aid the Western Balkan has brought out useful instruments in regional cooperation like RYCO or the planned mini-Schengen area between North Macedonia, Albania and Serbia. However, the core needs of democracy, rule of law and market economy have not been tackled at all by the process. Thus, in his opinion tools like the Berlin Process should be modified, if not abandoned at all.

The panel discussed the alternatives to a full EU integration of the Western Balkans. The participants agreed that there are hardly any other options for a membership in the Union. Edlira Gjoni concluded with the statement that “Albania absolutely does not have a plan B”. With the region and especially Albania kept in their geographic position, “we are stuck with the EU and the EU is stuck with us”.