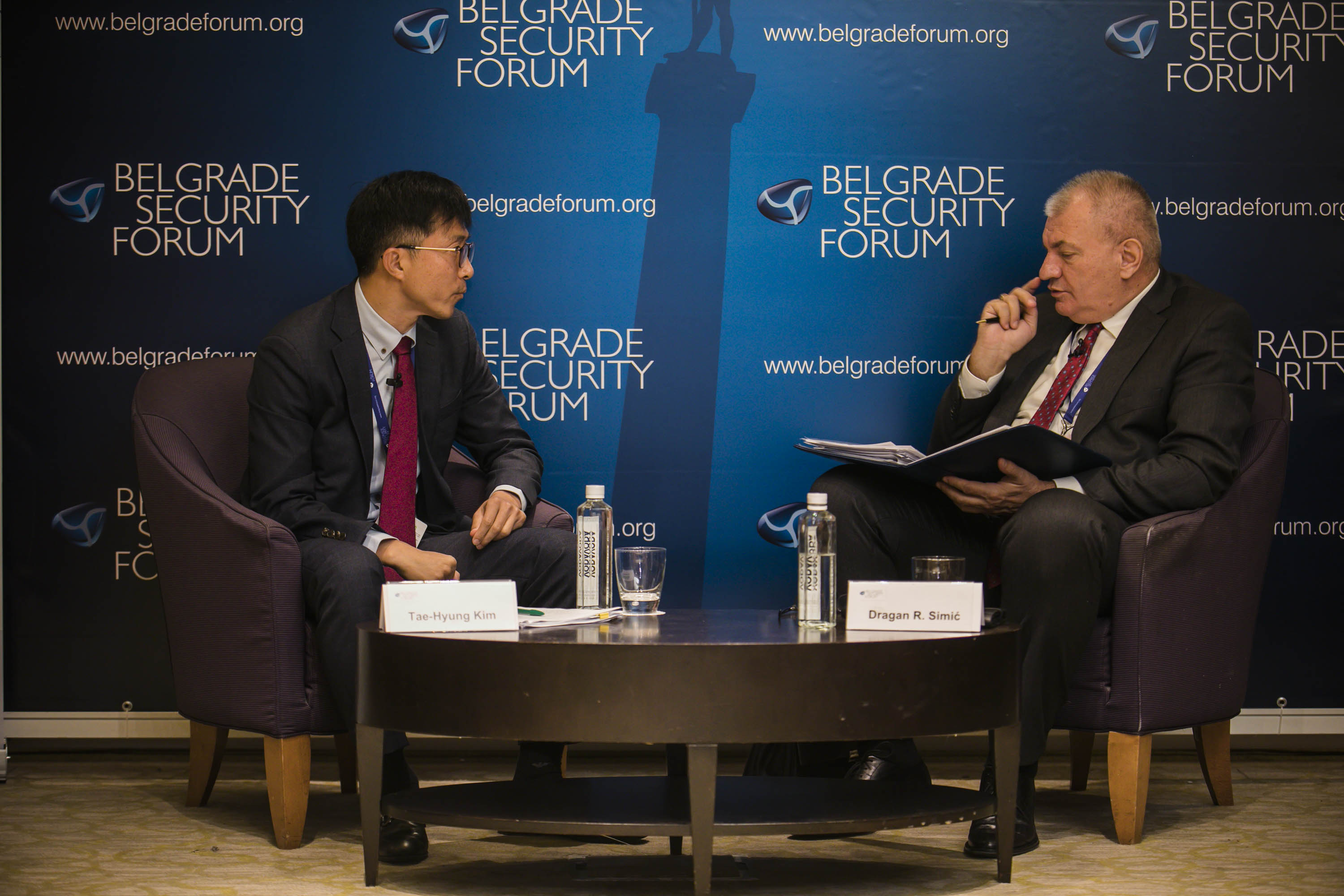 This side event, unique for its format of only one speaker, began with an introduction by dr. Dragan R. Simić, Dean and Full-time Professor at the University of Belgrade – Faculty of Political Science. He began by introducing the speaker, Tae-Hyung Kim, Professor and Chair of the Political Science Department and Vice Dean of the Social Science College at Soongsil University, Seoul, Korea.

Dr. Simić opened with pointing out that Europe was no longer the main point of international interest, and asked what were the current challenges to the Asian security architecture.

Prof. Kim drew attention to the bigger picture, rather than the bombastic headlines and breaking news. He responded that there were many challenges and outlined three main ones, firstly the one he identified as power politics. He explained that the power politics made a comeback and that they were not thought of being important since the and of the Cold War. He found the cause of this in China-US relationship, drawing parallels between the current US concern over the rising power of China and the Spartas concern over the rising power of Athens. He reminded that out of 16 times this situation repeated itself with various players throughout history and 12 times it resulted in war.

As for the second challenge – trade war, he spoke of the liberal idea of preventing war through economic co-dependency, but he noted that with the recent trade war between these two powers this co-dependency no longer exists, and how China is actively investing into military build-up and modernization, especially in the realm of Anti Air and Area Denial weapons systems which are seen as best counter to US power-projection in the region.

The third challenge professor Kim highlighted was the rising nationalism and its manifestation in territorial disputes between China on the one side and Korea and Japan respectively. He also notices that the strongmen leadership of the current world is currently making this situation a lot worse. As his predictions for the future, he frankly and pessimistically stated that “things are not looking very good“.

The moderator notes that the physical clashes spoken of are working, elaborating on the similarities noted by some people of the Chinese South Sea and the Caribbean (geopolitically speaking). On the strongman side of the argument, he notes that people on the top are not prone to discussion. He then asks about civilizational factors of the East Asian geopolitical relationships and of what can be done.

The professor also noticed a worrying trend of ever faster nuclear arms development by China. He was also not optimistic about the emergence of any common Asian security framework as the two power concerned, US and China, are doing exactly the opposite. From the civilizational perspective, he talked about the China-centered world perspective which shaped most of the history of this region until it was shattered after the Opium wars and gave rise to Japan’s power.

Dr. Simić than inquired further into the need for Asian century architecture, when prof. Kim concluded that no Asian century is possible without one such framework. When talking about why such a framework has not appeared in Europe for instance, he pointed out the historical, geographical and governmental differences between these two great world regions.

Conversation then moved to the USA and its policy in Asia. Kim called the US an Asian country, ever since its 19/20th-century interest and power projection over both the Pacific and Atlantic oceans became absolutely unchallenged. He also noticed that China was first spoken of as the rising challenger to the US dominance in the region in the 90s, and that the subsequent Afghanistan and Iraq war, as well as Economic Crisis, pushed America away. However, he notes that the Obama administration proclaimed „return to Asia“, which is now treated by the Trump policies.

Finally, he addressed North Korea, of which he said that the hopes for a peace treaty are small and that such a treaty would, if possible, fundamentally change the power balance in the region.