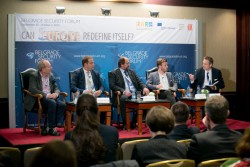 At the very end of another outstanding session the panelists agreed that the solution to the problem of radicalization that the entire world is confronted with is more than demanding. However, in the attempt to combat it to a certain extent societies need to work together, while including all sectors concerned, and by not expecting the police and the intelligence agencies to predict and prevent the problems on their own

Furthermore, the prevention of this particular problem hides in the excessive education of youth and students in least developed countries. This could prevent this target group from the wrong mindset that could lead them towards radical movements in their early adulthood. This is an easy but an extremely effective way, according to Florian Qehaja. Moreover, Mr. Qehaja drew attention to the fact that it is of a crucial importance to approach and fight violent extremism before it becomes terrorism.

Andrej Rupnik paid the most attention to the profile of people joining such movements, while firmly believing that most of them are just looking for a better life and economically safer future. Sadly, in most cases they end up living of the social aid, on the margins of the society.

On the other side, Franz-Stephan Gady spoke about a concrete way to defeat ISIS, as an excellent example. Mr. Gady strongly believes that ISIS can be defeated by military means, since similar things happened throughout the history. Now more than ever, we should all discuss military abilities of United States of America, Europe and other allies in order not to face the unwanted outcomes.

Alistair Crooke shed the light on the problem that Islam is facing. He focused on the fact that there is always a state being an actor behind the scenes, the wind in the back of such organizations. Mr. Crooke stated that he fully supported the idea of Russian President Vladimir Putin to psychologically defeat ISIS and Al-Qaida, while believing that this could be among the only possible ways to fight such movements.