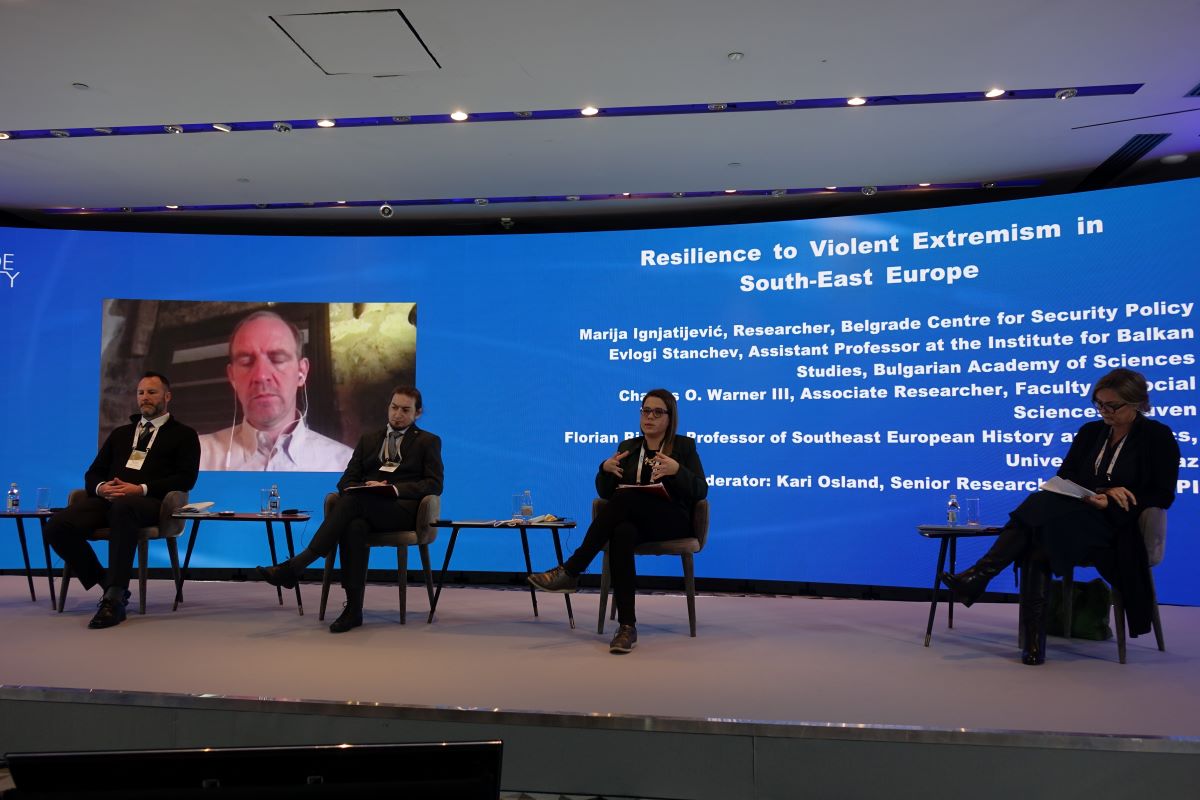 Ms. Marija Ignjatijević, Researcher at the Belgrade Centre for Security Policy spoked about the research carried out in Sandžak region at the second Academic Panel. There are many factors that make this region vulnerable to terrorism, but there is also a great resilience to violent religious extremism. She mentioned main factors of building resilience, mainly the role of the local communities, diaspora, moderate imams who promote moderate view on religion, and other influential groups and individuals. One of which is Ased Kundaković, who was preventing young people from going to the Syrian battlefield. Each of these drivers of resilience are met with the counter-narratives that are facilitating radicalization.

“It is hard to divide drivers of radicalization and drivers of resilience. They are sometimes two sides of one coin”, concluded Marija Ignjatijević.

Assistant Professor at the Institute for Balkan Studies of the Bulgarian Academy of Sciences, Mr. Evlogi Stanchev, talked about social marginalization as an indicator of violent extremism. He highlighted some of the conditions in North Macedonia which facilitate violent extremism, such as: economic instability, lack of education, political crises, general lack of media independence, proliferation of hate speech, and Covid-19 pandemic and its implications. He also added that socio-economic, demographic, cultural, educational, political and institutional factors are some of the different aspects of violent extremism in North Macedonia.

Mr. Charles O.Warner III, Associate Researcher at Faculty of Political Sciences Leuven commented on war veterans in Southeast Europe in context of resilience to violent extremism. He emphasized special relationship between resilience and veterans, and that experiences of veterans can contribute to more resilient civil society and academia. Trying to understand views and perspectives of veterans, their experiences and subjectivity is one of the possible ways forward.

Professor of Southeast European History and Politics at the University of Graz, Mr. Florian Bieber, pointed out that it is important to reconsider emergence of extremism in Southeast Europe, which is usually related to Islamic communities. However, there are other types of violent extremism that are linked with radical nationalism rather than radical Islam. Which is the case in the Western Balkans, where more relevant drivers of extremism are nationalistic discourses. Far-right groups in the Western Balkans are often driven by political elites in these countries, which needs to be considered while examining the region. Florian Bieber concluded that one should not fall into trap of focusing on a singular religion or community while examining extremism.