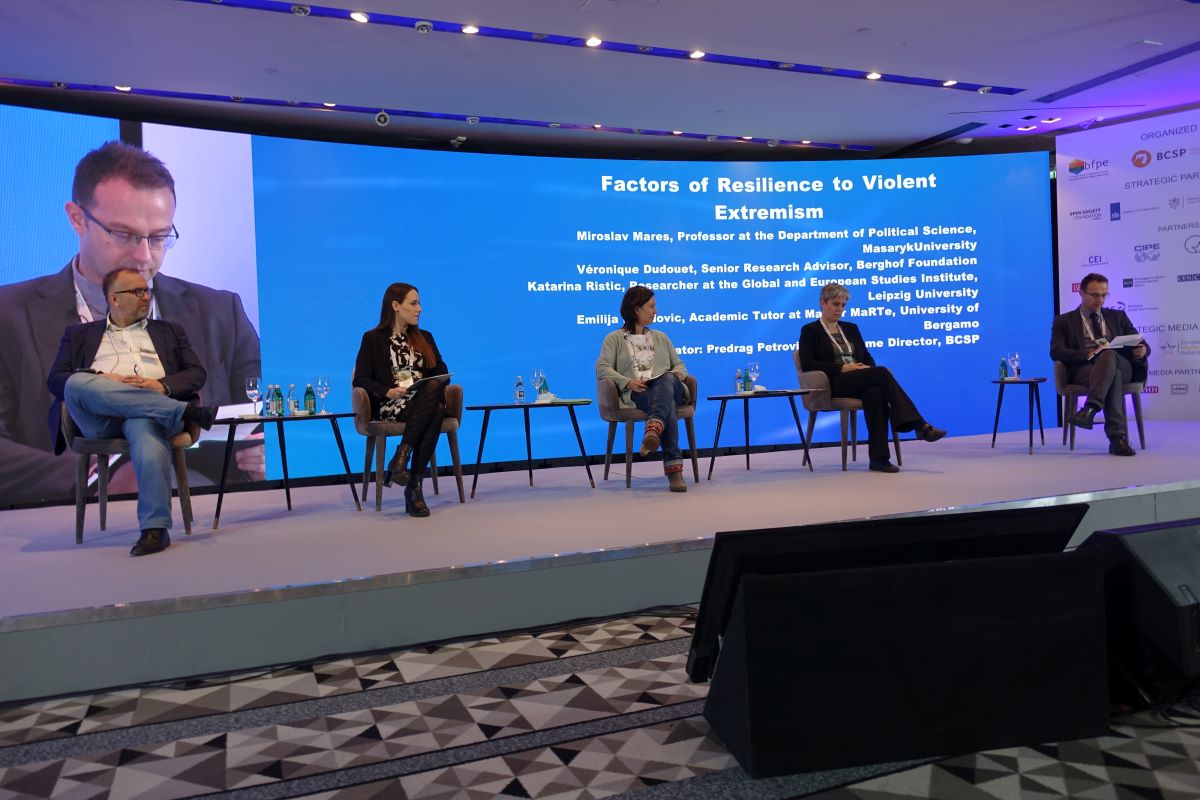 Ms. Veronique Dudouet, Senior Research Advisor at Berghof Foundation opened the first Academic Panel by saying that resilience has become a catch-all term. She pointed out that in the field of political science, resilience is defined as an ability of political systems to adjust to changing political conditions while maintaining their structures. Local leaders and their local initiatives have to bridge identities and introduce inter-ethnic cooperation.

”Making sure that individuals are aware of false narratives (or biased online content) through inclusion of former extremists may be the key to building community resilience’’, concluded Veronique Dudouet.

Ms. Katarina Ristić, Researcher at the Global and European Studies Institute, Leipzig University talked about the role of laughter in spreading radical ideas. She said that “deadly memes’’ are creating connections between extreme communities, as they are promoting their ideas, which can lead to extreme acts. Students don’t consider these memes as threats, because they believe they are experts on meme culture. However, they can create great impact on uneducated, since they simplify messages and combine them with humor.

Ms. Emilija Davidović, Academic Tutor at Master MaRTe, University of Bergamo, pointed out that women are often excluded from studies of extremism. However, they are engaged in it as members, combatants or enablers of extremist beliefs. Voices of women from different backgrounds must be heard, so that they don’t feel isolated from the society, because that makes them potential targets for extremists.

”Women’s voices are often silenced, but they are necessary for creating resilience”, concluded Emilija Davidović.

Mr. Miroslav Mares, Professor at the Department of Political Science, Masaryk University underlined that radicalization can also be seen in security agencies and police forces. There have been many cases of infiltration of extremists in security forces, for instance in Germany, France and Czech Republic. Resilience should be built through specific programs of prevention and through cooperation between academics and governments.

“Resilience is built when we see the officers as part of the community, not through isolation’’, concluded Miroslav Mares.