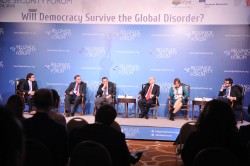 BSF Session What Choices for Countries in Between in an Increasingly Divided Europe? examined the geopolitical consequences for countries between the East and the West. Participants identified several consequences throughout history not only geopolitical, but also geo-cultural and geo-economic and the future will be no different.

Despite obvious polarization, bipolarity does not have to be a dangerous thing. For a long time, the EU was considered to be the only security provider, but nowadays it seems as an illusion. Due to the hesitation of the EU countries to react, other global actors feel invited to involve in the relations within the EU. The fact is that the EU cannot promise much nowadays with regards to stable and prospective solutions. Although it would be good to have a security alternative, it is probably preferable to stay neutral in order to normalize the relations in the Balkans. However, it is very sensitive to find a magic formula between the EU integration and political alliance on one side, and the military neutrality on the other.

The functionality of unity of the Balkan region is not satisfactory for its citizens. If there is no contact between neighbors, it will cause a dangerous step back in the EU integration process, participants warned.

The best option for Western Balkan countries is showcasing the will not to cause conflicts and above all, not to let themselves be instrumentalised.