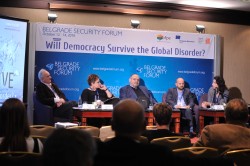 The last public session of this year’s Belgrade Security Forum touched upon the very crucial role of free speech in modern democracy. A very passionate exchange between the region’s most respected media experts attempted to address the current state of journalism in a rapidly changing, highly globalized environment in which information seems to have lost its quality content. Therefoe, the re-framed question Ljubica Gojgić posed was “will media survive the global disorder?”.

All panellists were quick to agree that journalism as we know it, is highly endangered. Throughout the discussion, the main focus remained on this subject, incorporating different views and arguments on how to deal with this new area in media.

Remzi Lani’s main concern was populist tendencies in media that had infiltrated the mainstream journalism. The tabloidization of media and recent phenomenon’s such as “post-fact journalism” have turned societies into so-called “gossip societies” that are misusing free speech against democracy.

Moreover, it is important to acknowledge that the centre of gravity has moved online which, according to Lani, has shifted the focus of interest away from traditional forms of journalism towards online media. In this context, he also stressed that “media literacy is necessary in order not to drown in the sea of irrelevant information.”

Sašo Ordanoski, on the other hand, argued that journalism had become an obsolete profession. This development was due to the emergence of Internet and the many advantages it provides in regards to easier and faster access of information. As a consequence, our globalized society is so diverse, it cannot possible agree on one universal concept.

Ordanoski painted a very dark picture of the future by stating that today’s public would gradually contribute to the death of journalism due to their lack of interest for context. The discussion about values and principles in media was finished. Hence, democracy needed to redefine itself, but before that a certain amount of chaos was to be expected. Since he believes that outlets such as Google are biggest media channels now, he suggests that governments will eventually have to start regulating the internet – a step that seems inevitable in the near future.

Tamara Skrozza, one of the more optimistic panellists, refused to give up the fight for decency in media. However, as one of Serbia’s most renewed magazine has demonstrated only this week, ethical values have become irrelevant in the discourse. Dishonesty and fabricated stories in favour of higher sales numbers have led to the realization that media in the region cannot be trusted. The core of the problem, Skrozza argues, it that media owners have transformed their outlets into private businesses, thereby crushing the essence of journalism – the quality content. Despite of this very unfavourable situation, Skrozza remains positive, convinced that recent optimistic developments have proven that it is not a lost cause yet.

Marious Dragomir was eager to mention that the current debate was going into wrong direction. It is misleading to reminiscence about a “golden era” of journalism because such a time has never existed. In fact, the transition to the new model has been already finished and now it is time to address those new dynamics. How can this new phenomenon be explained? Furthermore, he claimed that the interest on the public sphere should be reframed as well as a reflection on new funding models should be taken into consideration because the internet has come to stay for good. Now, it is time to adapt to those changes.

Although the future of journalism is not held under a good omen, we can only hope that the current status of “media anarchy” will eventually pass and – in the meantime – remodel and redefine the problems that were dug up in the process in order to “make media great again”.