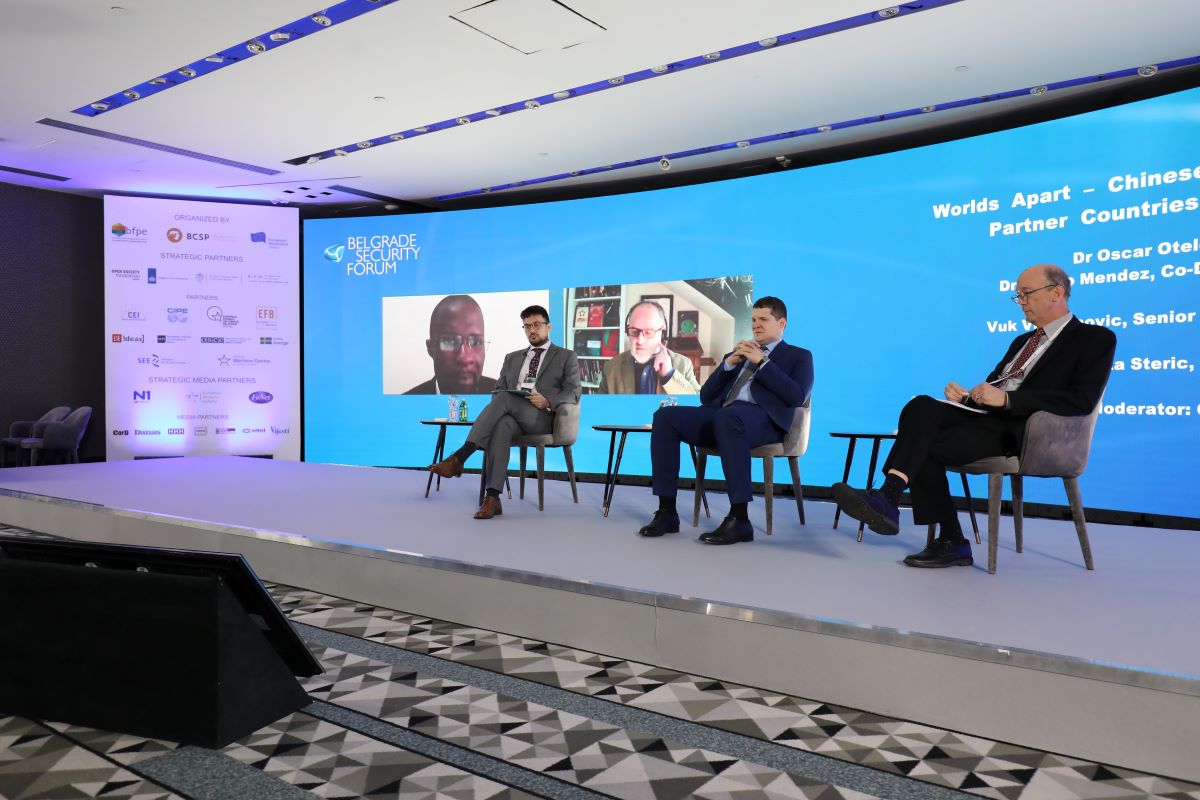 The Panel 5 looked into the question: What is the appeal of the Chinese influence in three different countries: Kenya, Panama and Serbia. The first question asked to all panelists was what are the main reasons for these countries to turn to China and vice versa.

Mr. Oscar Otele, Lecturer from the University of Nairobi said that China offered Kenya many projects in different areas: infrastructure, agriculture, education, health, etc. China offered investments because OECD retreated from the region. Kenya considered this as a window of opportunity primarily for infrastructure and economy. He added that it is easier to work with Chinese, than with the Western investors.

Mr. Alvaro Mendez, Co-Director at the Global South Unit, LSE IDEAS stated that there are many reasons why China is interested in Latin America, particularly Panama, but the most important reason is Panama Canal, since it is significant for the USA as well as for China. Besides that, Latin American countries are important for Taiwan, because many of them recognized Taiwan, so China wanted to move their focus from Taiwan to China.

Senior Researcher at Belgrade Centre for Security Policy, Mr. Vuk Vuksanović said that China is interested in Serbia’s location, as it can be called ‘’metaphorical bridge’’ between Europe and Eurasia. Besides geographical interest, there are legal advantages to investing in Serbia. Since Serbia is still not a member of the EU, it doesn’t have the same legal framework as EU member countries, but it still has close connections with the Brussels because of the candidate status. From Serbia’s point of view, role of China is important especially after two events that happened in 2008: declaration of independence of Kosovo and financial crisis. The crisis had impact on Serbia’s EU accession process, because EU was not interested in enlargement at that moment. Also, China does not recognize independent Kosovo, making China one of the closest Serbia’s partners.

Mr. Luka Šterić, Researcher at Belgrade Centre for Security Policy added two types of interests that explain partnership between Serbia and China: economic interests on China’s side (large-scale projects in Serbia might not be profitable for China immediately, but they might pay off in the long run) and political interests on Serbia’s side (Serbian government has many reasons to try to persuade the public that they are bringing investments from abroad). He added that China is often used for balancing, since political elites in Serbia can turn away from the EU in case that Brussels criticizes democratic backsliding.

During the Q&A session, panelist addressed the pushback to the rising Chinese presence coming from their respective countries. And while there are some cases that show how Beijing’s presence has been contested, in many cases there is lack of understanding or enough knowledge about the China. On the other hand, China is well prepared to do business across the world, investing not only in the infrastructural projects, but also in lobby groups that are pushing for fulfillment of Chinese interests.