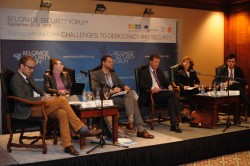 The key elements of today’s efforts in finding ways to build sustainable security communities are sense of the emergence and necessity for building such communities, participants said during the session devoted to the topic of Communities of Security Practices.

On the topic of Communities of Security Practice, the speakers agreed on both the nature of the most relevant challenges and reasonable ways of resolving them in an age of uncertainty. The key element of today’s efforts in finding ways to build sustainable security communities is certainly a sense of the emergence and necessity for building such communities. Additionally, mechanisms for achieving these goals are much different from those that were being used in the past. As Professor Jelica Stefanović Štambuk reiterated, peace can be built only in a peaceful manner. Nevertheless, taking into account the requirements of contemporary international relations, traditional diplomacy, mainly conducted by officials, is not the only way of resolving current issues. It is essential to consider relations at all levels of society because, by trying to exclude others from the process, eventually we will be the only ones excluded.

On an optimistic note, Mr. John Karlsrud stated that in spite of the lack of formal agreements defining issues and actions, Serbia has relevant capacities for peace support operations. The necessary measures that have to be taken in order to use these capacities are a new legal framework, reform of the security sector, as well as plans that are to be set by the government. On the other hand, the biggest security community nowadays, the Transatlantic security community, has been more and more engaged in different forms of peace building. Regarding this issue, it is very important to understand the relationship between NATO and the humanitarian community and their efforts, challenges and dilemmas in the process of achieving smoother cooperation, said Mrs. Alexandra Gheciu. Apart from the fact that they are both extremely important actors in the building of sustainable peace in the world, they do not consider each other as capable partners.

Piracy is a related problem present in the region of Southeastern Asia and Eastern Africa, and is absolutely relevant for all actors in international relations, mainly because of the rapidly increasing process of globalization. This process has made our world extremely small and no country is being faced with problems only within its borders. All this leads to a growing necessity for cooperation and agreement even among actors that are usually opposed to each other. Mr. Christian Bueger pointed out sharing knowledge and information as an important element of overcoming today’s problems. Therefore, the character of this process is mainly epistemic.