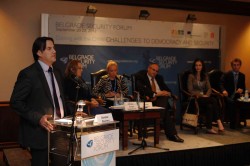 The second panel about Professional Practices of Security Community Building in the Western Balkans began with a keynote speech by Dimitar Bechev, who contextualised the processes of modernisation and change happening in the Balkans.

Far from being a distinct process as a result of the wars of the 1990s, Bechev pointed out that the story of the Balkans is very much a European story.

Questioning the reductionism of the discourse on the Balkans as merely being a narrative of the “yugosphere”, Bechev identified the various strands of political movement and identity within the wider Balkans, noting the multipolarity of the region, with intimate connections extending from the “Albania-sphere”, “Turkosphere” and “Greco-sphere”. As such, progress in the region, much like the contemporary processes of Europeanisation, has taken various paths and can be attributed to many of the same processes that the European hegemon has undergone, including but not limited to, the export of Westernization eastwards. Thus, while the flow of ideals has flowed from the centre toward the periphery of Europe, due both to isomorphic forces and economic reliance, the integrity of the centre-periphery relationship is still unsure. Insofar as both areas have mutual effects on each other, the future is uncertain. While the wider European narrative that subsumes both Western Europe and the Balkans can act as a glue for mutual development and a wider sense of community, the current crises may yet dictate whether or not “Fortress Europe” reins in its walls and creates an even wider periphery, or extends its reach to include countries which have shared very much a similar past.

The panel discussion focused on the practical aspects of building the security community in the Western Balkans, with a focus on the regional cooperation of the police, military, and diplomats. Kenan Dautović started off the panel discussion with his discussion of the military as a security actor in Bosnia, pointing out its key role in security-building as a counterpoint to the same role played by the police in Croatia.

Zrinka Vučinović continued this discussion based on her research with the police in Croatia. She talked about a crucial change in the modernisation of the police force with the development of related laws in Croatia, and followed this with an assessment of the stages Croatia has gone through in increasing its regional police cooperation.

Cvete Koneska continued the discussion of regional police cooperation based on her research on the Macedonian case. Highlighting the wide divide between policy and practice within the police and also amongst security sector institutions, she discussed how differences in the “atmosphere” between political elites and frontline service deliverers, namely their norms, values and habits, can keep the preferred socialisation (i.e. the goal of cooperating between countries) insulated from the lower ranks of police hierarchies. Since exchanges happen at the higher level and not between street-level policemen, initiatives to enhance cooperation may tend to be compartmentalized.

Those who actually make the effort to connect countries on the regional level — diplomats — were the subject of Arjan Dyrmishi’s discussion of the role they play in enhancing regional cooperation. The research conducted on officials in the diplomatic sphere was interesting because it is rarely carried out at that level. In order to analyse how their professional understanding is shaped, his research focused on measurable factors such as the recruitment process, diplomatic training, and their posts abroad, among others. Relations between diplomats have progressed, he assesses, however it has happened mostly through broader informal communication since factors such as protocol and territorialism can limit such cooperation.

Sonja Stojanović wrapped up the wider, collective research project on which these researchers participated and discussed further their findings and the intent behind the design of the project. Before posing some poignant questions to the panellists, she highlighted the positive fact that in assessing a cross-section of the security community — with a focus on security professionals — the research has shown that security sector cooperation is actually more advanced than other sectors such as education.