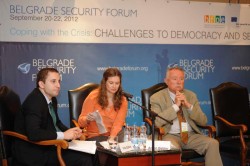 At the opening session of this year BSF Academic Session, academics talked about the reasons of absence of Security Community in the Western Balkans and potential steps for its formation.

Speaking about justice and the security community in the Western Balkans, prof. Jelena Subotić referred in particular to history textbooks in Serbia and Croatia, which do not identify certain undeniable historical facts. Interpretations of history, especially those found within Serbian and Croatian history textbooks show us that these countries still represent their histories in an exclusive, rather than an inclusive, fashion. Serbia in particular continues to try to portray itself as a victim, especially with their focus on the NATO intervention in 1999, and Croatian history textbooks focus mainly on Operation “Storm” (Oluja) as a fight for future generations and the most important moment in Croatia’s fight for independence Ms. Subotić said. She sees these incompatible and opposing principles as the most important difficulty in building a security community in the Western Balkans. In conclusion, she pointed out the importance of paying reparations and offering “community gifts” from all sides in order to build trust in the region, which is essential to the further construction of the security community.

Mrs. Rebecca Cruise tried to explain the most important points in the development and implementation of the security community concept on the regional level. The core factor in this process is not only governmental decision-making, but also the inclusion of the public, with the media playing an important role and, of course, the involvement of the international community, she said.

Professor Anton Bebler explained the main reasons why the Western Balkans has neither represented a security community, nor any kind of community at all. The Western Balkans is only a region, and in professor Babler’s opinion, it will never become a real security community, due to three main groups of factors: long-term instability and insecurity, the lack of “central gravity”, which is derived from high dependence on international assistance. As the last and very important factor, professor Bebler pointed out violence, especially armed conflicts, that were never stopped through negotiations of regional actors and governments, but rather through international intervention. The burning problems in the region are organized crime and corruption, as well as territories with the presence of foreign troops. The biggest hope for the Western Balkans is prosperity and democracy, which are to be established and consolidated along with Euro-Atlantic integration, he concluded.

Speaking about energy aspects of security, Mr. Danko Aleksić addressed the problem of the high dependence, not only of the Western Balkans region, but the whole world, on non-renewable resources such as fossil fuels that are only located in a few places on the planet. As an important factor in energy security, he pointed out that the building of an energy community does not imply the concurrent development of a security community.

The panel was closed by Mr. Filip Ejdus, who summed up the points referred to by the speakers and addressed the issues present in all four papers: the importance of history in security community building and the role of public opinion, which should be taken seriously, taking into account material factors and discourses in security community building.

In their final remarks, panenelists finished off with recommendations for the Western Balkans to start a long process of security community building between themselves.