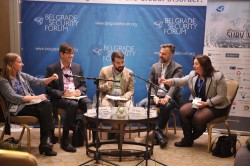 The speakers of the eight Session Opening Democracy for Citizens: Open Government Partnership discussed major trends of the expanding open government data movement – democratization of knowledge, the role of citizens, and whether this movement is impacting real change.

They agreed that although adapting to open government standards improves accountability and efficiency of Government, it is not always easy to incite change. It is a challenging journey that thrives on cooperation between civil, private, and government sector. While the upsurge of countries wanting to join the open government framework is encouraging, the lack of tangible progress is evident. Single individuals who champion open government principles in their countries do not constitute a long-term solution and this issue must be tackled as soon as possible.

Benefits of open data movement are many – for example, it allows the public administration field to become more competitive, contributes to data justice, and attenuates the possibility of data corruption. Still, we need to delineate the difference between the openness of knowledge and the openness of knowledge infrastructure. It is possible that Government would open the knowledge infrastructure under the pretense of opening the knowledge. The speakers noted that both malice and incompetence could underlie this dangerous tendency. Another challenge that open government data is facing is that the production of verifiable and reliable data requires copious amount of work and highly expert professionals who can analyze big data sets. “False scientist” could distort the real data and corrupt the evidence-based decision making.

Opening democracy can be seen as a conceptualization of a new social contract between citizens and state. Because of that, it is crucial to shed light on power balance issues and to investigate the source of incentives for the release of data by Government, on one hand, and for the use of that data by the citizens, on the other. Consequently, apart from educating experts, civil society should be engaged in empowering citizens when it comes to accessing and using open data. Citizens should be aware that they are a part of an economic game, in which they are renouncing a part of their personal data for the greater good. The speakers thus stressed the importance of digital and cyber security.

Towards the end of the discussion, speakers agreed that capacity building and data literacy are two major challenges facing open government data movement. They highlighted the need to bridge the gap between citizens and Government. Most importantly, information delivered to citizens should be meaningful and presented in an attractive and a timely manner.