Fifth Session Walking the Thin Line: Democracy and Security saw the participation of practitioners’ of democratic oversight of security institutions and a shared moderation by Marta Martinelli, Head of Team-External Relations, Open Society European Policy Institute‚ Sonja Stojanović Gajić, Director, Belgrade Centre for Security Policy. The discussion developed over the character of democracy – security relationship with a conclusion that more security does not mean less democracy. Those two concepts should be complementary. 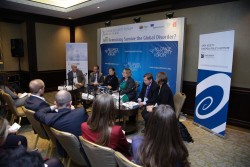 Theo Koritzinsky put it shortly “the line is not ‘thin’, it is one sheet of paper with two questions – how do we secure democracy and how do we democratize security?” As he said, there were three main perspectives: more security was build, less democracy there was; strengthening security services to protect democracy; and lastly making compromises. His position is that there is always a need for an independent institution for democratic oversight.

Kostis Papaioannou argued that if the word ‘safety’ is used, better are chances for democracy because people were more likely to participate. However, “if we use the word ‘security’, people are likely to pay other stakeholders to take care of it”, as he said.

After moderator Sonja Stojanović Gajić posed a question of persuading the public that democratic control was necessary, Papaioannou marked it a challenge because of the negative reaction of the public to securitisation. He warned that the right wing agenda is infiltrated into politics and that there was a need to create counter-narratives, citing the example of migrants/refugees and the manipulation of their image in public.

Papaioannou underlined that „some securities are more important than others“, once again mentioning the example of refugees.

Although German oversight of Parliament is considered to be exemplary, André Hahn assessed that it was facing many difficulties. He expresses doubt over the statement that democratic oversight of intelligence services was even possible. „We need whistleblowers like Snowden if we are to find out about criminal activities in intelligence services. To know everything about everyone is not the right way”, he warned the world without security services was an ideal.

Panelists recommended that there should be more cooperation with civil society, namely with media, and NGOs. The focus should be on protecting people from external enemies and not the establishment from the public backlash.