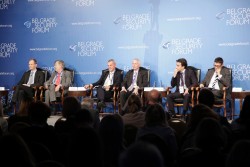 Antonio Missiroli emphasised that one could put the word ‘EU’ instead of the word ‘democracy’ in the conference title, therefore asking ‘Will EU survive the global disorder’? Mr. Missiroli believes that in terms of a new common strategic vision, the strategy is a point of departure rather than point of arrival. He also stated that drafting the new strategy was a difficult exercise, reconciling different views and attitudes. It is release will be difficult: should it be published despite brexit? Nevertheless, he believes we were better off nowdays with the new strategy than without. The principle of solidarity has to be strengthened again.

François Heisbourg stated that the new strategy is not a strategy – it is a description, vision, aspiration. There were two problems in drafting the strategy pointed out by Mr. Heisbourg. The first one is basic unseriousness in drafting a text when you don’t know if you are going to have a major member or not (reference to referendum in Britain) which is a bad signal in itself. The second one is the description – the executive summary is missing crucial words such as ‘China’, ‘Russia’, ‘US’ while the word “peace” is used 41 times, “war” 2 times, “military” 3 times, “power” 3 times, “force” never. There is no feeling of what are the challenges of the world today, which is very troubling. Mr. Heisbourg ended on a hopeful note, saying that there are good news: EU got a lot better at doing, taking action than drafting things. He called enlargement an enormous victory, predicting that if the EU survives, so will enlargement.

Dr. Thomas Bagger pointed out that many people believe in an “institutional fix” to make EU an unified actor in foreign and security policy, but that is not how it works. One of the ways to address this issue is to have a conversation, which has been achieved by the new strategy. This conversation is finally happening after Brexit and there is a real window of opportunity for common security and foreign policy. As far as the language prism goes, he pointed out that resilience is an important word and that it can be interpreted as resilience both inside the Union and in the neighbouring countries. He recognizes the fragility of the integration process but emphasises that there needs to be room for collective action in the European project or else Europe is in trouble. In that sense, the strategy has done a good job, broadening the security debate in many member states. However, every strategy should be followed by an action plan, which should be a collaborative process, not only within EU member states but broader.

Mr. Bruno Maçäes started by stating that is was a mistake to release strategy the day after British referendum, because it sends a message about the vagueness of the strategy. The strategy should have dealt with Brexit, but otherwise, it is not a disappointing document, believes Mr. Maçäes. It influences and steers processes that are new and it steers the Union in a new direction. He too discussed the importance of the term resilience – it introduces the idea of stability while also appealing to reforms. On subject of globalisation, Mr. Maçäes said that since globalisation is not retreating, the EU has to embrace the competition. This awareness is what the strategy lacks.

Amb. Cameron Munter talked about perception after the Cold War: everyone is changing except US. There was an effort to understand the changes within a framework that was comfortable to US, but the realization of today is that the US has to change too. It is challenged by Trump and the movements he represents. As far as the EU goes, he said “We don’t know what happens in Brussels.” and there is a tendency to say: What are the Germans thinking? There is a cooperation between the US and the EU, but it is through NATO. He also ended on an optimistic note saying that war is too important to be left to the generals, diplomacy too important to be left to the diplomats. Other institutions are taking over, such as businesses: what Gates Foundation can do, the US embassy can’t.
Mr. Richard Whitman believes that the role of UK after divorce regarding EU-US relations but also multilateral relation is, in word of Bob Dylan, “blowing in the wind”. Another disruptive effect is the US presidential election and its outcome. Brexit hasn’t started yet, but there are already costs for the UK. He posed the question of how to manage the transition so it doesn’t have a negative effect on either the UK or EU. UK wants to be a full participant without being a member, but that is very unrealistic. Brexit’s outcome will show where UK is going to fit in.