Bojan Brkić, the host of the first Plenary Panel The Great Migration of our times? The Balkan piece in the EU puzzle, shortly explained the panel’s key issues – the challenges the migration crisis presents to the EU community, taking account of the legal, social and humanitarian dimensions. Experts of different positions tackled all the dimensions in an interesting debate.

Irena Vojačkova Sollorano firstly explained the crucial difference between the terms refugee and migrant. “A refugee is a person who feels threatened in their country and is prosecuted for their beliefs and is in need for protection. A migrant is a person who wishes to leave their country for the pursuit of better life, regardless of which dimension of their life do they wish to enhance.”

Moreover, Vojačkova Sollorano pointed out how what Europe is facing is a crisis of values. “Providing aid for refugees is often regarded as our obligation but it is not an obligation, it is our moral value; and if there are national leaders in the EU who proudly state how they will not aid refugees, we have a problem”. The expert also pointed out how the Belgrade Security Forum is a great event with a crucial importance, but in order to make a difference, we must take the debate to a much higher level. By the end of the panel, all the panellists were asked why exactly is the Western Balkan region to be taken as an example of humanitarianism in the crisis and Vojačkova Sollorano explained: “Serbia and other Western Balkan countries made significant efforts to register the incomers, which is a crucial thing to do because it gives these people dignity, they are not just a number, but they have an identity. Furthermore, it protects the refugees and separates them from migrants who are not in need of protection. Given the fact that there is no Refugee Policy within the EU, Serbia acted on its own and showed a generally high level of humanity”. 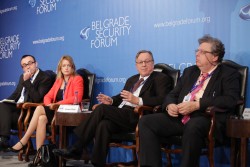 The mediator continued the discussion by referring to Elizabeth Collet, asking her to define the essence of the crisis which Europe is facing. Collet explained how the current crisis is too complex to be defined as only a “refugee crisis”. The crisis is, according to Collet, a cascade of different issues, namely “a humanitarian crisis to which the EU struggles to respond, a crisis of migration management and an existential crisis of the EU since many countries within do not wish to aid the incoming refugees; which is in direct contradiction with the values on which the EU was founded”. All these issues, coupled with an “all-time-low public confidence” are how the expert defines the crisis.

Collet warns how “The public confidence will be eroded further if governments do not make a change. All is promised and very little is realized”.  Furthermore, Collet made a closing remark which also carries a serious warning: “The migrants and refugees in Europe are here to stay and there is something we are not talking about. We are not talking about a problem which will be present in the following decade and that is the integration process or the lack thereof”.

A particularly interesting panellist, Istvan Gyarmati, when asked to depict the Hungarian attitude, briefly stated how there are two opposing groups within Europe, one which promotes and advocates a European solution and the other one which promotes and advocates a national-based set of solutions; and deciding who to group with is a different task. “International public law has so far proven to be more of an obstacle rather than a solution”. In the course of the debate, he later stated how: “We need to face reality even if it is politically incorrect and difficult”. A particularly interesting statement was referred to the media. Gyarmati claimed how the media does not at all influence the public since the public does not follow the media. A point with which most of the panellists could agree on was that the ‘EU periphery’ needs to be included in the decision-making process of the EU, particularly regarding the migrant crisis. However, Gyarmati pointed out a viewpoint which was not much discussed. “These countries [EU periphery] have an option and this option is to simply let everyone pass through. We need to stop being polite in relations with Brussels because being polite only put us in a position from which we take orders. Brussels should help us prevent something which will be bad for us but it will be worse for them”.

Ahmet Evin warned about the grounds upon which the EU – Turkey agreement was created. “The agreement is not on solid grounds and I personally do not see it happening and consider it a ticking time bomb. If this bomb does go off and the agreement fails, there will be a major influx of refugees to the Greece islands; an influx with which Greece will not be able to cope with”. He continued to explain how one of the key issues in Europe, in regards to the migrant crisis, is the identity of the migrants since their appearance in Europe introduces a serious Muslim presence in the EU and there is a certain “Jihadi appeal” to the 2nd and 3rd generation of Muslims in Europe.

Rosa Balfou focused on European foreign and security policy; stated how “Europe does not have a migrant crisis. The Middle East has a crisis which has led to a crisis in Europe; not because of the refugees but because of a set of problems”.  Referring directly to the Western Balkan region, she holds how: “If the WB countries would manage to pursue integration without competition among them, this would be a very important message and a great example for the EU countries to understand and perhaps follow”. When asked about the lack of a humanitarian solution from the EU, Balfour explained: “This exactly is the problem; unilateral decisions being made on national levels, very different positions and the lack of a unanimity in the decision-making system prevents us all from moving forward”.

Vladimir Petronijević warned about the lack of dialogue, which he holds, is the key to any further developments. A forum for both governments and civil society in which they could discuss with other EU member states is as he holds “exactly what we need in order to prevent the lack of dialogue and to include all participants of the problem to the table”. He points out how the influx of migrants and refugees could in the Western Balkans be interpreted as “both a curse and a blessing, but in order to use the potential of this blessing, we need brave politicians, we need statesmen”.