The topic of the Plenary Panel 3 Addressing Political instability and Weak Institutions in South East Europe was an ambitious one, as observed by its moderator Judy Dempsey.

Participants listed treats to the democratic system in the region such as religious extremism, 21st century nationalism and rise of the populism. They made consensus that there was a need to move beyond the state of denial and move on to the state of acceptance, in order to come up with new ways to fix the existing problem. 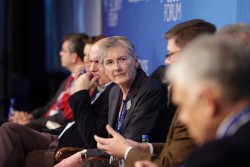 Moreover, they stressed that institutions have no social credibility, as well as a bad reputation. Speakers underlined that although all the necessary ingredients for a democratic system exist  in the Western Balkans region, they are not functioning as well as they should be.

Remzi Lani identified the democratic transition on status quo as the main problem in the region, as well as that things were not changing because people lost confidence. He pointed out the process of “reverse transition” which is currently going on in Europe, and the process of “frozen transition” which is present in the Balkans. Threat to liberalism, according to him, is iliberalism consisted of extremis, populism, and xenophobia.

On the other hand, Thanos Dokos pointed out that even though the institutions are constantly being tested by the economic and migrant crisis, people were still largely pro EU. Greeks, for example, despite all the crises remain pro-European while the voters of Golden Dawn are still in single digits.

James Ker Lindsay gave a different point of view, stating that the Brexit has strongly affected the institutions and made them completely disconnected from the EU.  He stated that democracy should be devoted to enable the people to get the best out of life, and not to provide jobs for political clientele. 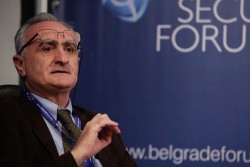 Alida Vračić assessed that there were strong international and domestic efforts when it comes to creating institutions in the Western Balkans. However, “we are forgetting economic dependence of the Region,” she added.

Žarko Puhovski, again, had a different approach to weakened institutions saying that “when institutions were strong, the people were slaves“. Thus, the real question would be if the world order can survive democracy. The only thing that prevented the recent conflict between Croatia and Serbia, according to him, was the law trust people have in institutions. In that line, he stated that people were surprised with the help offered by Albania during the recent floods because they don’t believe institutions.