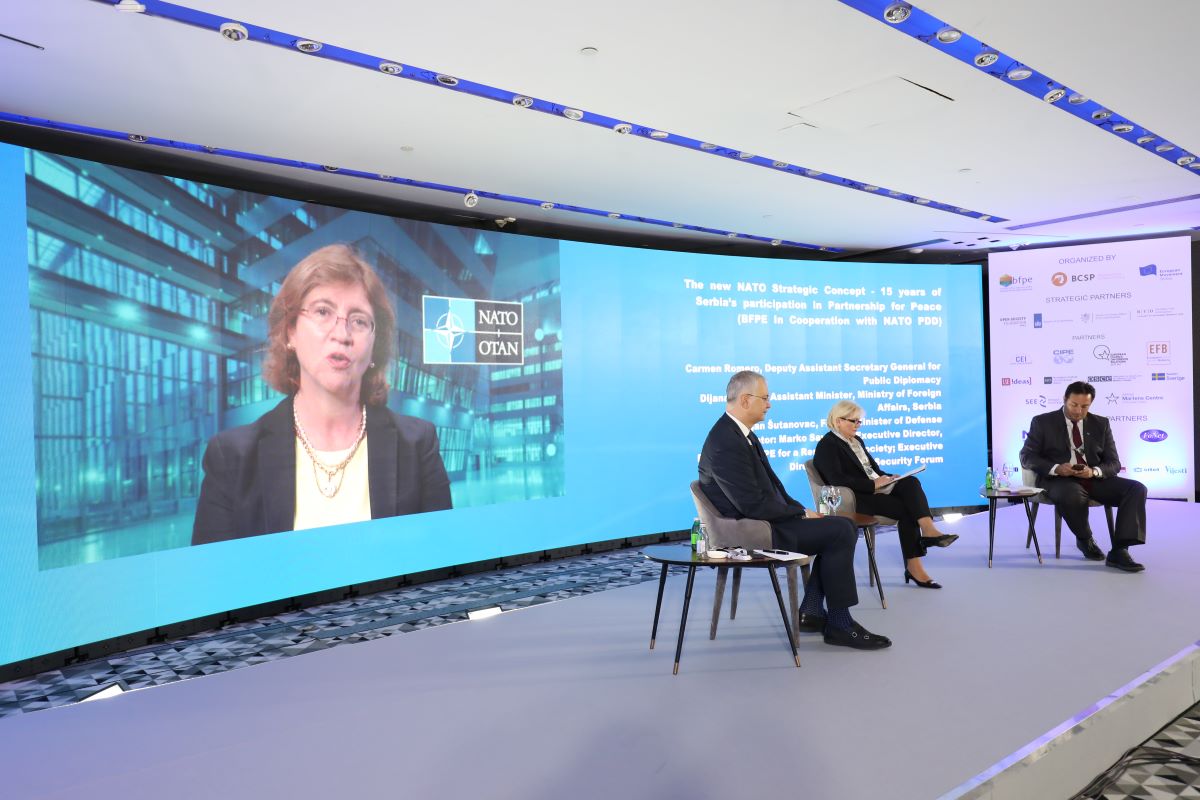 Ms. Carmen Romero, Deputy Assistant Secretary General for Public Diplomacy of NATO addressed the Forum via video address and said that NATO wants to see safe and peaceful Balkan. This is one of the reasons why NATO supports EU in facilitating dialogue between Belgrade and Pristina, since that is the key for stability across the region. She added that NATO is facing many security challenges, particularly because the global balance of power is shifting. However, NATO is evolving, by boosting its cyber security and deepening its cooperation with the EU and countries such as Serbia.

“We are looking forward to many more years of close partnership”, said Carmen Romero.

Former Minister of Defense of the Republic of Serbia, Mr. Dragan Šutanovac, said that Serbia finished its military reforms based on NATO standards, back in 2007. He added that while political relations are now much more relaxed, Serbia didn’t use marketing to enhance public diplomacy, so citizens are not aware of great things that NATO has done in Serbia. That is the reason why we need to improve the public relations between two sides.

Ms. Dijana Ivančić, Acting Assistant Minister for Security Policy in Ministry of Foreign Affairs of Republic of Serbia, said that Serbia made great progress in cooperation with NATO. Partnership for Peace Security agreement was signed in 2006, and the first IPAP (Individual Partnership Action Plan) was adopted in 2014 and Serbia is working on second cycle of IPAP. She added that the main area of cooperation is political dialogue which is very intensive. Second main area is presence of International Security Forces (KFOR) at Kosovo and Metohija.

Dragan Šutanovac added that a big part of the cooperation depends on the media and elites, political and social. Political elites need to show the benefits of cooperation between Serbia and NATO, because people are not informed enough about it. Public opinion in Serbia about NATO used to be more positive in 2007 than today.

Dijana Ivančić stated that Serbia’s relation with NATO is still burdened with events from 1999 and this image cannot be changed overnight. She pointed out that PfP is the best framework for joint action because each state can choose level of cooperation and define their own interests and goals. NATO has never pressured Serbia in decision-making process.

Ivančić thinks that NATO should perceive Serbia as reliable and responsible partner, because Serbia has shown solidarity many times. For example, Serbia sent medical help during Covid-19 pandemic to some NATO state members, such as North Macedonia, Montenegro, Italy and Romania.