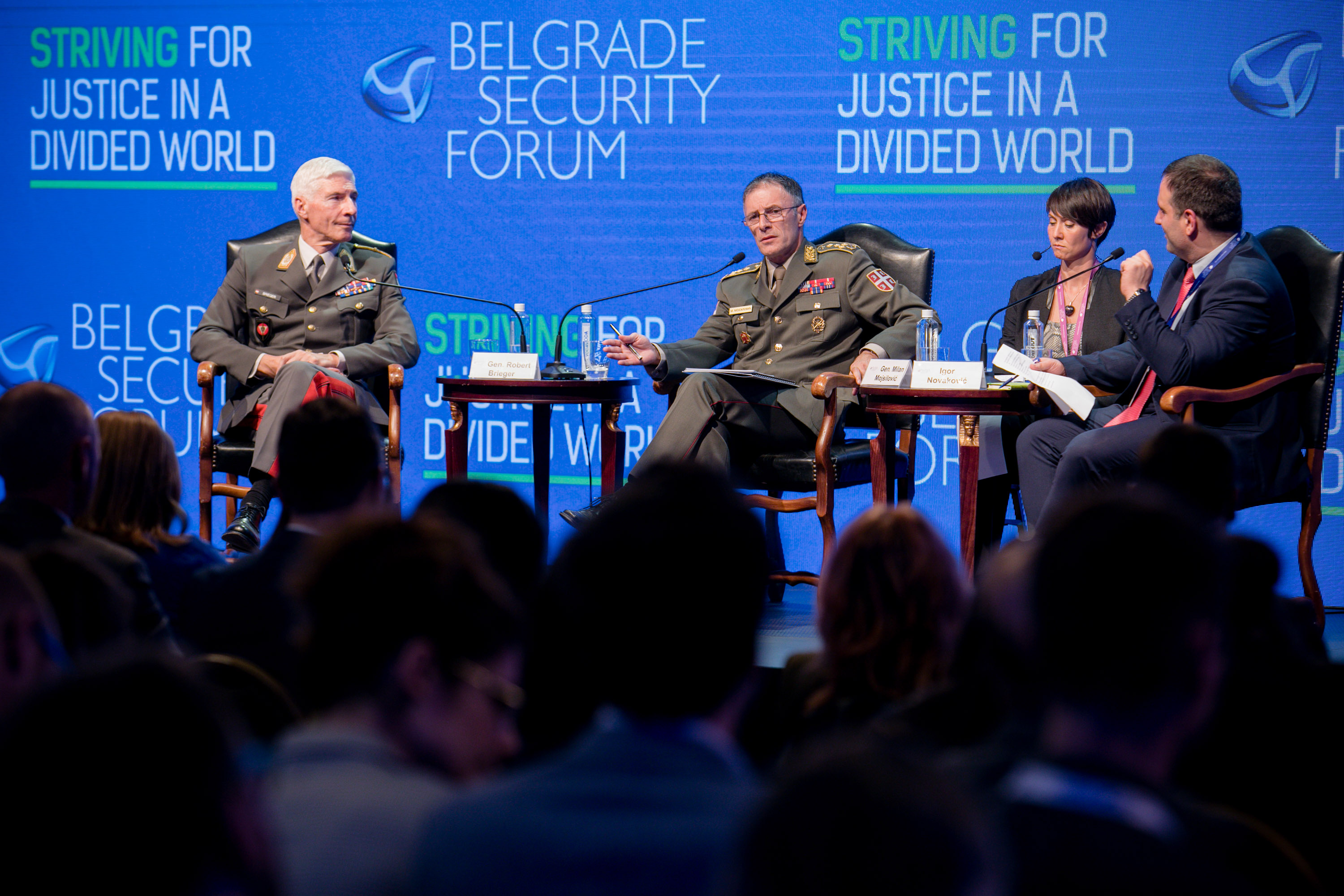 The special event presented the complexity of modern military neutrality from the perspectives of two generals, both chief of staff, from two European countries that aim towards military neutrality, this being Serbia and Austria. At the beginning of the panel, moderator Igor Novaković made a summary of what it means to be neutral. He covered the history of neutrality, seeing its progress through the 20th country as first use, then highly immoral, and finally as a facilitator of peace. He also briefly touched on the fact that neutrality can be perceived as a problem to the concept of collective security as understood by the UN.

Gen. Milan Mojsilović began by explaining that Military neutrality was both a legal and political state that can be taken in both wartime and peace. All neutral nations accept certain norms and rules. He especially highlighted the need for neutral states to exercise no bias in their politics and refraining from the commitment to all sides equally. As Serbia is in peacetime, he explained – during peacetime neutrality is focused on avoiding any kind of binding alliances.

He pointed out that Serbia was the only one in the Western Balkan region to choose this route. This was, as he noted, determined by historical and political factors. In other words, by its previous experiences, and by predictions of future benefits of such a move. As it happened in 2008, it was very much influenced by the attitude towards Kosovo. However, gen. Mojsilović was careful not to overstate military security over all others. After all, as he elaborated, Serbia is committed to international cooperation in all forms of security, especially on comprehensive issues as organized crime. For this purpose, neutrality is no optical.

Gen. Robert Brieger, Chief of Defence Staff of the Austrian Ministry of Defence, made it very clear that Austria is the friend of Western Balkan nations and that Vienna is a factor of Balkan security. As he pointed out Austria is a big believer in cooperation in the context of solutions to Balkan issues. After all, a big point of gravity in the Austrian interest in the Western Balkans.

„If you don’t export security, you will import uncertainty“, he said emphasizing the need for regional cooperation ad underlaying  cooperation on border security, as the region faces a migrant crisis, is crucial.

On the question of the moderator regarding the specificity of Austrian neutrality, Gen. Brieger explained that the Austrian neutrality is the product of the peace treaty of the Second world war. It was a way to return sovereignty to Austria and offer it away towards the UN membership.

Moderator asked a question concerning the difference between military and political neutrality. Gen. Milan Mojsilović assessed there had been none; both follow the will of the people, which in Serbia is not to join any military alliance, be it CSTO or NATO. However, he does point out Serbia has a special level of cooperation, greater than any Partnership for Peace nation, as well as having EU membership as a strategic goal. He also addressed the fact that Serbia will join EU battlegroup in 2020, but explained that this is still viewed as accepted within armed neutrality, as there is a mechanism to say “no” and pull out should Serbia want to avoid a military clash.

As the questions of the audience were welcomed, the topics of the possibility of preserving armed neutrality during war and its price were raised. Both speakers were optimistic on the first note and Gen. Mojsilović answered by saying that it depends on the budget and that Serbia aims to reach 2% of the budget being spent on the military funding by 2029.