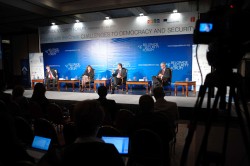 Although the European Union faces many problems, there are many ways for this influential international actor to overcome the crisis. This was said during the first plenary panel of the 2012 Belgrade Security Forum.

Mr. Ulgen remarked that the economic prescription for a loss of competitiveness includes currency devaluation, which is not an option in the Euro-zone countries, and therefore alternate policy measures must be devised. However, societies “must be willing to put up with with a loss of output and employment – a decline in their real income and standards of living – to regain competitiveness.” Although Germany, as a large economy, may not be a good blueprint for countries on the periphery of the EU, there are smaller countries whose experience, such as Latvia’s in responding to the 2008 contraction, may prove instructive to others.

“The countries of the EU are facing economic deficits and democratic deficits,” said Ms. Grubješić, but the economic crisis has also affected countries in the Balkans. In the case of Serbia, “low productivity sank even lower; high unemployment rose even higher (25%)” as a result of the crisis, Ms. Grubješić continued, and painful structural reforms were not undertaken. Nonetheless, the government aims to reduce the budget deficit in the following year, which will be essential for future reforms and the process of integration of Serbia into Europe. “The responsibility of politicians is to be honest and consistent without sugarcoating the truth,” said Ms. Grubješić.

The lack of competitiveness of Balkan economies was a recurring theme. Ms. Grubješić noted that the low productivity, lack of competitiveness, and weak public and private sector exacerbate both the effects of the crisis and the effects of the responses to the crisis in the region. Mr. Jackson observed, “Serbia and other aspirant countries are non-competitive at the moment, and the further east you go, the more non-competitive they are,” continuing that the decade of wars, visa bans, and inability to access Euroatlantic markets continue to bear detrimental ramifications for the region’s economies. “The solution is rapid integration,” concluded Mr. Jackson.

All speakers agreed that the role of domestic governments, maturity and strength of the democratic institutions are of great importance. Ms. Grubješić pointed out that the European integration process of the Balkans thus far indicated shortcomings both on the part of national leaders, who blamed the EU for necessary reforms, and on EU leaders, who missed opportunities to communicate the benefits of programs.

Meanwhile, noted Mr. Ulgen, the economic crisis has tarnished the EU’s image in candidate country Turkey. The EU is now “seen as part of the problem,” he commented, and as a result, “it’s becoming much more difficult to push reforms and convince large segments of the population that European accession is a good thing for Turkey.” In the event of a potential UK exit from the EU, “the paradigm of the UK’s relation with Europe… would be of great interest to Turkey,” he said.