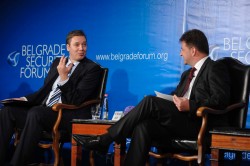 Three aspects of the paradigm – European integration, regional integration and the ongoing crisis – framed the opening panel discussion at the 2012 Belgrade Security Forum.

“We have to admit that the EU has become a moving target in a way – it is going through its own integration and is redefining its structures and how it functions,” said Mr. Lajčak. However, he stated, the crisis should make the EU even stronger – and that EU membership remains the most positive prospect for the countries of the Balkans. . Mr. Lajčak observed that European integration is not merely a matter of aspirant countries coming to the EU, but incorporating European values in their political systems and protection of human rights. “There is an empty chair waiting for Serbia at the European table. Once occupied by you, it will ensure that you are no longer on the agenda but setting the agenda,” concluded Mr. Lajčak.

Mr. Aleksandar Vučić identified the fight against organized crime and terrorism as demanding substantial regional and international cooperation, and pointed to the importance of two recent agreements between Serbia and the EU – respectively establishing a framework for Serbian participation in EU crisis management operations, and setting security procedures for exchanging and protecting classified information – as examples of Serbian commitment to continued international cooperation. “All Western Balkan countries have an interest in creating a stable and prosperous region. Of course, it will not be easy to preserve stability in the region, but I am sure that we are on a good path,” Mr. Vučić remarked, continuing that international assistance supporting Serbia’s integration is “of the greatest significance for our country.”

On the issue of Kosovo, Mr. Vučić stated, “Serbia will do its best to part of a peaceful Europe, and to solve all the problems in Kosovo with peaceful means.” Despite some points of disagreement, he continued, “We support and appreciate everything that has been done by KFOR and have very good cooperation with them… and will continue our cooperation and are sure it will be for mutual interests.”

Ms. Trišić-Babić observed that the region passed through a nightmare in the last two decades, and that it is important to ensure that the tools for needed reforms are available. While new conventional threats are unlikely to occur in the Balkans, she noted that the region should pay more attention to events in North Africa and Arab Countries, and that demography will be an increasingly important issue in the Balkans.

“In the last year, Serbia received EU candidate status, Montenegro got a date to start negotiations, and Bosnia and Herzegovina got a roadmap,” said Ms. Trišić-Babić, continuing that in the process of the European integration, “Croatia is still a valuable partner and has done much for the Balkans,” such as in sharing the translated acquis. Ms. Trišić-Babić concluded that while the economic crisis and shifting priorities mean that the Balkans are not being discussed on the highest levels, regional cooperation and connection will prove key to the progress of regional European integration.

“The Visegrad Group may be the best example for the Balkans,” as it more closely resembles the experience of the region than does the Nordic Union or Benelux, said Mr. Schneider, continuing, “We learned that there is merit in cooperation in itself.” Mr. Schneider also observed that national priorities and EU aspirations should not be juxtaposed against one another, adding that in the context of the crisis, aspirant countries should be aware there is no consensus within the EU about the relationship between enlargement and the crisis. “Your voices are important, and from our lessons we can say to put resources into regional cooperation, not only the effort,” Mr Schneider concluded.

Ambassador Winkler noted that the region has become much more stable, but that it seemed that “regional cooperation still relies too much on external incentives.” Regional and international cooperation needs to be practical, he said, identifying cooperation between police and joint military training exercises as examples of practical cooperation. DCAF is still active in the countries of the region, and will continue its presence, he said, noting, “the job isn’t done, it will never be done for a long time.”

The discussion touched upon the challenge of regional cooperation amid differing perceptions of history. Mr. Vučić noted that while Visegrad is a good example of cooperation, the Central European countries did not experience the same deep divisions and conflicts undergone in the Balkans. “All of us need to find an objective approach to everything that happened in the past, but I doubt that will happen in the next few years,” he said.

Mr. Lajčak observed that Visegrad Group countries have different interpretations of history, but said, “There is no drama in the fact that we may view some historical events differently, as long as we understand that history is for historians, and politicians have a responsibility for the future.”