European Union and its neighborhood policy were the topic of the second panel “The EU and its Peripheries” held at Belgrade Security Forum earlier today. Ms. Tanja Miščević opened by saying that Serbia will not be considered a periphery of Europe. It would be beneficial to have candidate member states to take part in the debate on future of Europe. In fact, those countries should offer new energy and including them in discussion of new policies makes it easier for them to prepare for the EU membership. H.E. Michael Davenport agreed all member states are central to the future of the EU along with future member states. Moreover, he expressed his belief that the new Commission will be just as committed to enlargement as the previous. 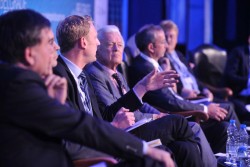 At the beginning, Dejan Jović, moderator of this meeting, described the ideas of the European integration and some problems related to it. He stated that the European project, as an antiwar idea, rested on additional pillars of freedom, development, and solidarity. Then the discussion proceeded on questions of whether EU can be considered a global power, and how to solve challenges it is facing.

Mr. Elmar Brok concluded that the power the EU possessed in the field of economy could be translated to political power indeed through the enlargement process is a win-win situation due to the fact that it converted into expansion of space of peace, freedom, and the rule of law.

Mr. Dušan Siđanski started by mentioning dramatic challenges happening in Europe today. Describing problems and contradictions of the Eurozone followed. Furthermore, he touched on topics of moving towards a greater political union and eventual federalization of Europe, while Mr. Mats Persson declined the idea of EU as a federation or political union. He reminded how Serbia is committed to integration at the same time others were contemplating to leave. Moreover, he proposed a view that EU could be a more flexible structure, shaped around the single market. In his words, such change would allow the EU to stay together. Furthermore, such structure would allow Serbia to join much earlier because the EU currently is just way too complex.

Mr. Sinan Ulgen talked about failures of European neighborhood policy and discrepancies between the proclaimed EU Security Strategy of 2003 and the reality. Despite the greater role that was meant for the Union, it seems the goals have not been reached. Arab Spring was one more opportunity that the EU failed to grasp. He concluded by recommending reengineering of EU neighborhood policy and its southern dimension.

Mr. Ivan Krastev described Belgrade as a good place to discuss what is happening in Europe today. He pointed out the renewed relevance of the Yugoslav experience in dealing with international affairs today. In dealing with the East, he told that all European policies towards Russia rested on assumption that the country can be transformed. However, this seems not to be the case. In the end, he explained how Russia feels afraid because it is not competitive on economic and social levels.