Plenary session during the second day of the Balkan Security Forum under the title Opening the New Strategic Debate between Transatlantic and Eurasian Agendas was marked by the discussion about the security challenges emerging from the two agendas between transatlantic and Eurasian. Most important issues included the Ukraine crisis and its effects to the relations between the EU and Russia. The question posted was whether it will have an impact on Serbia and other Balkan countries, and what role would Asian giants play in it. 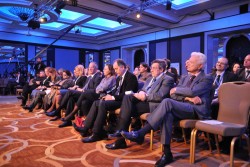 While these crises might bear a resemblance to the Cold War era, Ms. Karen Donfried president of the German Marshall Fund of the US, stressed that there is no real connection and historical analogy with it. Russia still has strong and ongoing relation with the European Union and the USA on various aspects, such as education, economy, policies and some aspects of crisis management. Therefore, interest should be to bring nations and countries together to overcome conflict situations, she concluded.

Mr. François Heisbourg, special advisor at the Foundation pour la Recherché Strategique, agreed that the time of the Cold War has passed and we were facing different reality – pluralism and strongly interconnected global world. He suggested Serbia be aware of this because it makes it impossible for it to continue with the old Tito’s international policy that had positive consequences in old times, but will not have the same impact now. Times and conditions are today different, more plural and not bipolar. He also believed that parallel can be drown between the Ukrainian crisis and the one in Yugoslavia 25 years ago, however the reaction of the USA towards this conflict is not the same because global situation and relations are not the same.

Mr. Adam Rotfeld, Polish researcher and diplomat, noted that European weakness to adequately react to this crisis givs leverage to Russia. Mr. Vladimir Baranovsky from Russian Academy of Sciences shared Russian perspective on the situation and its position in global world. According to him, Russia has a unique geographical position which forces it to be between Transatlantic and Eurasian agendas, which are not competitive between themselves. Russia faces more difficult and demanding point between different interests. Although there is an ongoing conflict, there are also groups in Russia which seek for compromises and solutions.

Ms. Shada Islam, director of policy of Friends of Europe, assessed confrontations and crisis could not grow to be world conflicts because Asia would stay aside due to its economic and political relations with Russia that would only go stronger. These countries also face bigger internal problems and struggles with poverty, slow rural development, ecological issues, etc., which attracted their attention more than the situation in Ukraine. It was agreed that this was a chance for the Balkan to play a positive geopolitical game by being the bridge between transatlantic and Islamic world.