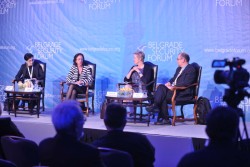 Plenary Panel 3 Could 1325 be a new Frame of Reference: From Local and Global and Back reflected on the UN Security Council Resolution celebrating its 15 anniversary next year. The main observation is that there is still a lack of understanding of the potential of the Resolution, it is primarily understood as the women’s right resolution and limited to participation and recovery. More guidance is needed for its proper understanding and implementation, starting with the notion that it is not a gender, but a security issue.

Panelist tackled several issues such as the use of the Resolution 1325 for positive transformation change and its limited success in promotion of women’s rights, leadership and participation in security issues, as well as the revisions of the national actions plans (NAPs)

If the Resolution 1325 was to be observed just as a starting point of the process the revisions of national actions plans would deliver better results. Standards developed by the international organizations are transponded top down as recommendations onto the local level; making NAPs a part of international framework. NAP developing is good for security sector reform process, reconciliation, recovery, and making the process more sustainable. It comes down to the sharing of best practices, and time is needed to monitor changes and introduce improvements at the local level.