Underlining theme throughout all the presented papers in the Panel 1, Does EU need Foreign policy? was the impression that the EU has impressive global presence, but is faced with many new challenges. 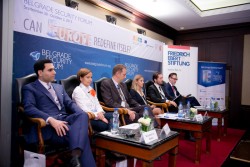 Dr. Baker presented a paper making a parallel between actual challenges of European Union’s Enlargement and Neighborhood Policy (ENP) and historical example of state of California in the early 1900. He proposed the solution used in California case bypassing elected branches altogether if they are corrupt and inefficient. The EU should use its soft power to induce more democracy and bypass corrupted institutions.

Dr. Sus talked about the European External Action Service (EEAS) and relation with member states using the example of three different countries: Germany, Poland and Great Britain. She concluded that member states were not facilitating and reacting to the threats and problems jointly, but relaying solely on European institutions to act without being engaged themselves, calling this a paradox.

Dr. Marchetti talk about the important role of civil society inside and out of member states. From the liberal point of view it is good have OCDs perform as trust generators, but real-politically speaking they also risk to be seen as foreign influence and used by different state actors in their own agenda.

Dr. Ana Isabel Xavier shared her views on “European Security Strategy” talking about capabilities and vulnerabilities, as well as partnerships that needs to be redefined. She pointed out that the underlying importance must be delivering the results.