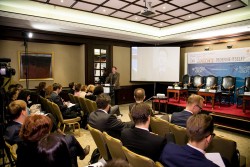 Asle Toye opened the Academic Event of the fifth Belgrade Security Forum with the topic of the crises of liberal internationalism in Europe, saying that today’s discussion would begin with hitting in the heart of challenges that the EU is faced to.

Mr. Toye said that in the last few decades the EU has been faced with the golden age of liberalism and expansions. Expansions were visible on many levels including growth of world population, decrease of violence, but also increase of international cooperation since there were more than 16000 international organizations.  Since the 1990s EU has been working on the development and implementation of the EU values and integration which includes crises management, foreign aid not exclusive to the EU member states. One good examples is the recent mediation of Federica Mogherini in the dialog between Serbia and Kosovo.

Mr. Toye has underlined that concept of liberal nations in Europe concerns four major parts which include importance of market economy, democratization, rule of law, and if one of them was to fails it would influence the others, second one is related to the economic interdependence, and concept of integration, third to the expansion of technology, and fourth to the role of the United States.

However, although there is an existing concept of liberalism and common foreign and security policy there are challenges that the EU is currently facing. Some of them include the EU’s response to the refugee crises, use of technology, especially when dealing with the Islamic questions, Ukraine crises, and Syrian question. It is clear that the concept of frozen conflict is still alive. It seems that the EU has been slow in realizing that policies do very little in reducing wars. There is a gap in the organization level which includes having agreement, having resources and instruments in order to deal with the crises. In the recent years it is clear that management of resources and instruments is on the much higher level that earlier.

Mr. Toye has concluded that the EU is still to be challenged with the questions of British referendum, refugee crises, relation with Russia, and it remains to be seen whether it will become even more integrated and unified or it will go the other way.