The panel titled The EU and The Post-Soviet Space has raised some critical questions regarding the European Neighborhood Policy and Ukrainian crisis, bilateral relations, Russian and EU foreign policy, differences between the EU countries and theirs approaches to the Crisis. One of the basic questions debated on this Panel was the EU Neighborhood Policy on right track.

Geopolitics in EU cannot be ignored anymore. Now, it is on the top of agenda. EU adapted its policy to the neighboring countries in accordance with the changes in the Russian foreign 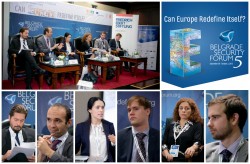 policy. Certain evolution from promotion of values to promotion of interests is in place, from misunderstanding to better formulation of Russian foreign policy. EU was investing much more in promoting values and changes in the neighboring countries from 2003 to 2005, and Russia at the time, seemed to be of weak influence.

Putin’s third term and Ukrainian crisis was the time of the EU’s shift from values to interest, from lower technocratic relations to high politics. However, the EU doesn’t have tools, capacity nor the commitment of member states to promote a more geopolitical approach. The EU and Russia should seek to find other issues to cooperate on global level (ISIS), which do not represent their crucial interests. The EU has become much more aware and shifted its “eye” on Russia.

Success or failure of eastern State has a heavy impact on European Neighborhood Policy which motivates the EU to exercise its role in regional and global politics. ENP aims to create community feeling and can be perceived as continuity and coherence between internal policies and external actions; namely, to create structures that are sustainable on the long term, even when the support stops.

The EU now has the perspective as mediator in peace processes. After Sarkozy’s mediation in Russo-Georgian war, and after the fact of not having same threats for all states comes on surface of ENP strategy. Peacekeeping and disarmament have to be on higher level of EU strategies documents. Question what drives EU to be involved, is it human or European security reveals its role in international relations. For past several years EU act like Ministry of Foreign Affairs and NATO took a role as Ministry of Defense. EU integration has become a trigger instead of being a stabilizator which additionally complicated its role as mediator and peacekeeper.

It is evident that the EU has no single perspective, but it doesn’t mean that EU isn’t involved in negotiations and mediation. Good examples include France and Germany as actors in negotiations with Russia in Ukraine crisis. In addition, the absence of integration perspective makes it difficult for the EU as whole to make its own strategy and to act like unison.