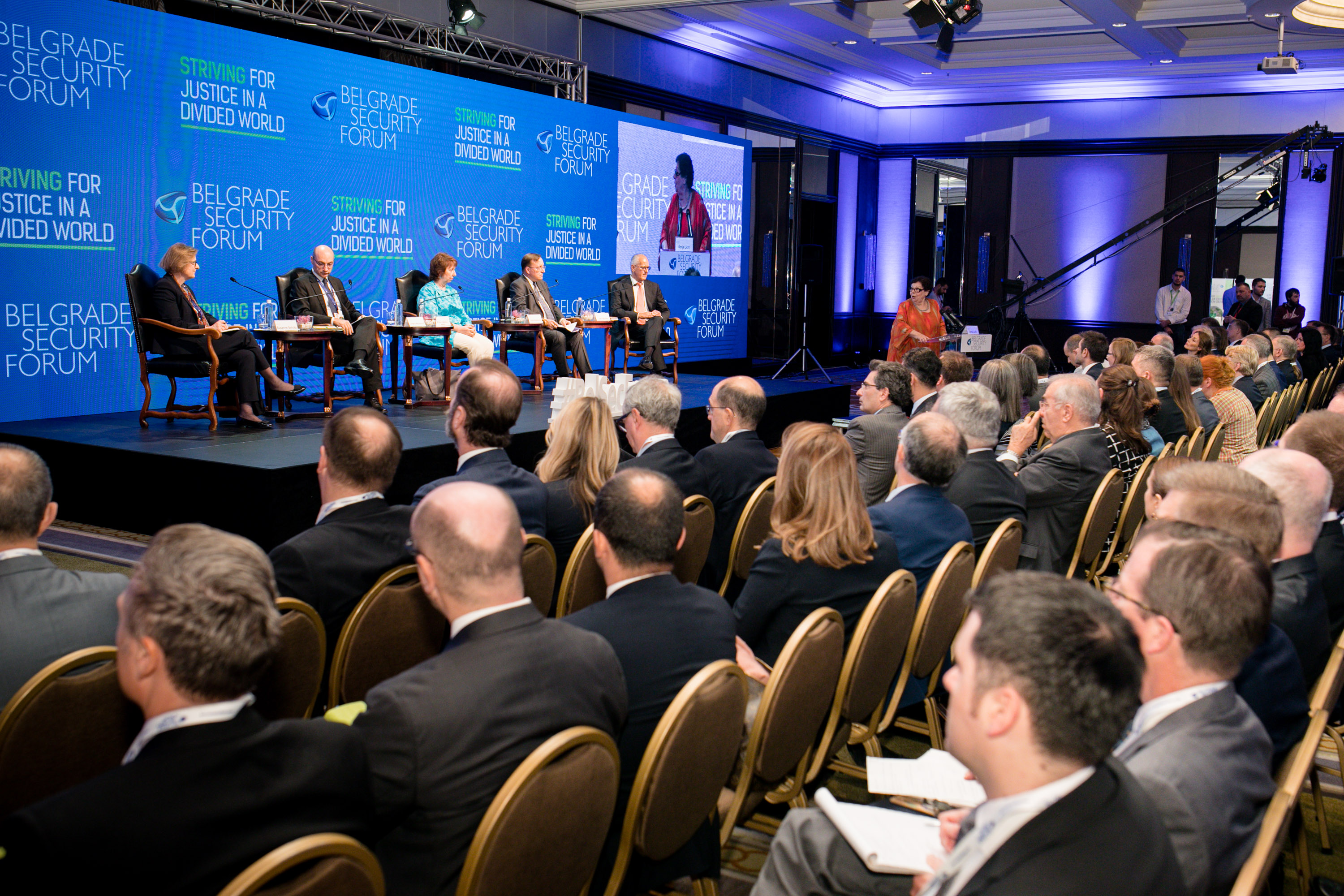 The grand opening event of the Belgrade Security Forum 2019 sparked the debate on the European perspective of the Western Balkan (WB) countries. Chaired by Ivan Vejvoda, Permanent Fellow at the Institute for Human Sciences in Vienna, the discussion revolved around the accession process and EU integration in the WB, as well as state-building capacities in the region. The moderator started the discussion by drawing attention to the ideological and political shifts in the WB that brought the transition from isolation and communism to democracy and readiness in embracing the European values and ideals.

The opening speech of the event was delivered by Sonja Licht from the BSF Steering Committee, President of the Belgrade Fund for Political Excellence which brought to the attention of the audience the importance of discussing and deliberating on issues of security and justice of our globalized world.

“We are delighted to bring the global debate home”, stated Sonja Licht, claiming that the concept of home refers to the whole Western Balkans region. The tradition and continuity of the Belgrade Security Forum have been driven by raising awareness on global issues that affect and influence the Western Balkans, as well as on bringing these issues to the public discourse in the region and finding common answers to common challenges.

Licht also added that the Western Balkans politics are rightly dominated by the perspective of the EU enlargement, but given the delays in this process the countries of this region should be focused on enhancing their domestic capacities, regional cooperation, and their democratic state-building.

Chair Vejvoda stated that the WB is the last heart of Europe that is not yet integrated, while on the other side enlargement has become the driving force of political change and the hope of all citizens in the region.

This point of view was supported by the distinguished panellists in this session which included The Right Honourable Baroness Catherine Ashton, Former EU High Representative for Foreign Affairs and Security Policy, Susanne Schütz, Director for South-East Europe, Turkey and EFTA States in the German Federal Foreign Office, Amb. Frédéric Mondoloni, Director for Continental Europe at the Ministry of Foreign Affairs in France, and David Kostelancik, Office Director for South and Central Europe at the U.S. Department of State.

Susanne Schütz and Amb. Frédéric Mondoloni emphasized that the European Union is not complete without the Western Balkans being part of it, while Rt. Hon Catherine Ashton highlighted that the cooperation between the EU and the WB is vital for transmitting a sense of unity and addressing issues that individual countries cannot address alone.

Besides focusing on the importance of the WB for the EU and vice versa, as well as on the enlargement perspective, the panellists referred to the opening of the accessions with Albania and North Macedonia as a critical moment in the status quo. While there was a general agreement that North Macedonia had implemented most of the reforms successfully, there was some scepticism regarding Albania’s performance on the rule of law and corruption. However, Susanne Schütz stated that despite the domestic challenges in instabilities in these countries, the EU should give a green light and say yes to the opening of accession talks as a reward for the countries’ positive commitment to meet the EU’s requirements and standards.

Recognizing these domestic challenges and the need for continuous political reforms, David Kostelancik pointed out that the US remains committed to help improve the situation in the region and to provide its assistance in the conduct of good governance and state-building in the WB.

In addition to these statements and conclusions, the panellists also addressed the political tension existing between Kosovo and Serbia, where they appreciated the commitment of both countries and their respective governments in discussing and negotiating peaceful agreements. It was stated at the end that the reconciliation of the Kosovo-Serbia relationship is a significant factor in determining peace and stability in the region, and it will help in creating a stronger Western Balkans which will prove its European values to the EU.