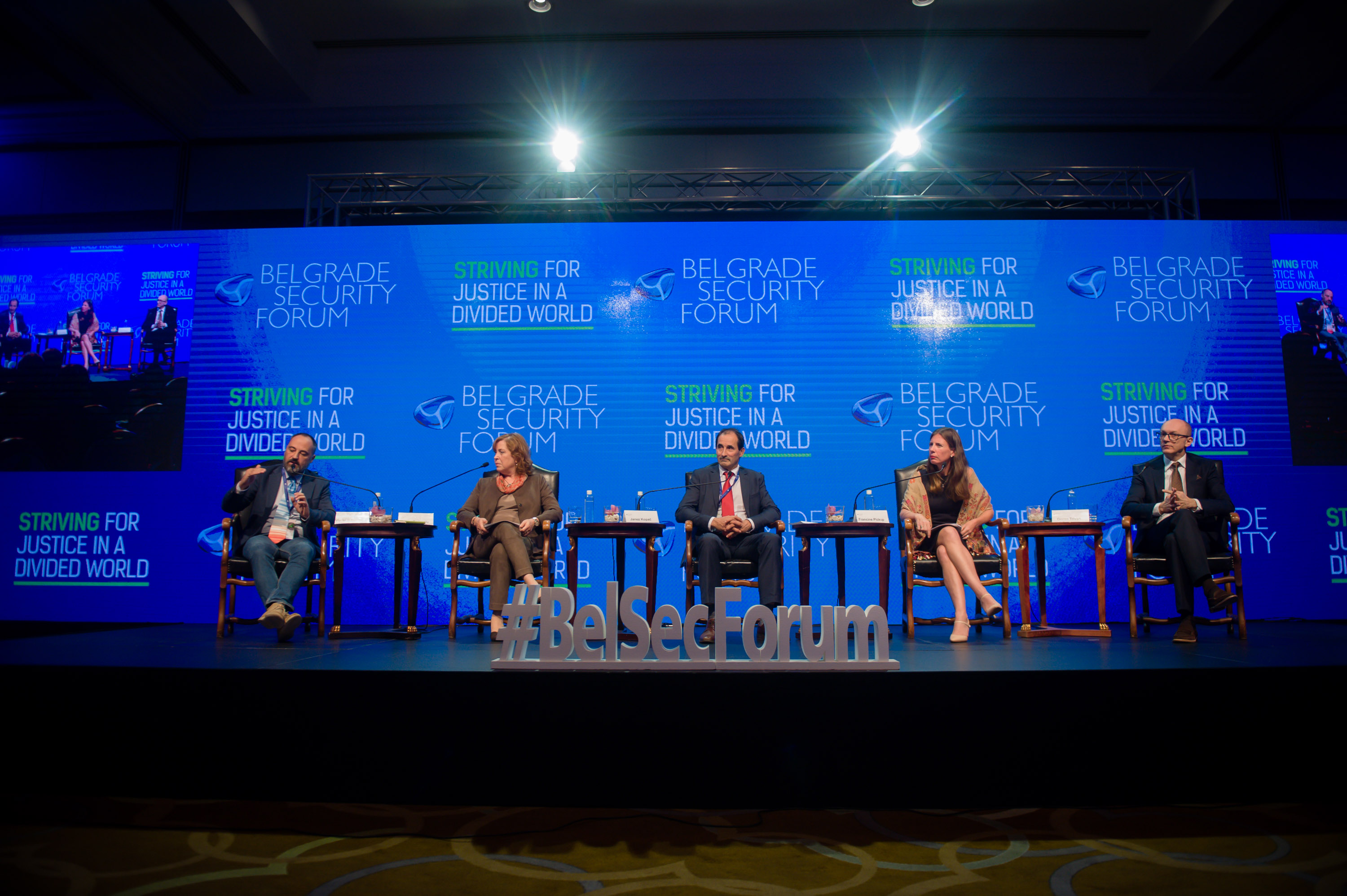 It is not possible to talk about any type of security without taking into consideration environmental protection and natural resources, were the words of Goran Trivan, Minister of Environmental Protection Serbia that opened discussion about the hot topic concerning all mankind. Panelists went in turn answering the question on how is the changing climate affecting security and what needs to be done.

“In many countries around the world the vulnerable suffer a double burden of climate change and conflict. When institutions are weak and many are struggling to survive, the vulnerability deepens,” Pickup reminded.

She explained that security isn’t just a military issue or an issue between states and nations, saying that human security actually refers to the vulnerability of individuals. If human insecurity rises, that can potentially contribute to rising conflict and insecurity.

Minister Trivan had the opportunity to present a way of dealing with these challenges from the perspective of a small country like Serbia.

“The limited availability of natural resources, as well as climate change, affect the degradation of the natural environment, threaten the stability of individual countries and entire regions and directly affect national security in this regard” he argued and added that mankind was not going to be the same anymore.

“We are changing our civilization, but not in a good way” he added.

Minister was fast to admit that Serbia does not contribute much to climate change, but, on the other side, has fully recognized the importance of environmental security.  He called for cooperation in the region and said that international community and the EU needed to push the institutions to get on a level of other European countries.

“Systematic approach is needed to address the challenges of climate change” he said and announced the hopes for soon adoption of a climate change law by the end of the year.

Dr. Vladimir Đurđević, associate professor of meteorology at the Faculty of Physics, University of Belgrade, had a scientific point of view when it comes to climate change. Regarding the limit of 2 degree Celsius increase in global temperatures, he pointed out the damage it would cause if we ever went over the limit. Among many other, dangerous consequences would be ice melting on the North Pole, sea level rise and everyday climate migrations.

“Our functioning on the planet depends on maintaining a stable climate. We are now out of thermal optimum, but if we stick bellow 2 C degree rise, we could be able to adapt to the changes that follow. If we pass the 2 degrees, the economy will be in serious decline and we will trigger so called tipping points in the climate system.”

Đurđević showed a hopeful spirit when it comes to youth.

“Young people are the fuel in the race against climate change. They care about our future.” he said.

One of the ways of which we can contribute to battling these new challenges on an individual level is trying to influence politicians and leaders to work on these issues.

Dr. Nedret Emiroglu, Director of Health Emergencies and Communicable Diseases (WHO Regional Office for Europe) emphasized the impacts of climate change on health and overall wellbeing of people.

“Strange diseases come to Europe because of climate change. We are witnessing increase in intensity and frequency in contagious diseases” she argued then added that climate change causes not just social issues, but number of health issues, jeopardizing human security. Dr Emiroglu pointed out the importance of raising awareness about the impact of climate change on health and a solution would be demanding policies that can contribute to improving health.

Janez Kopač, Director of Energy Community Secretariat, talked about the difference between the EU and the Western Balkans when it comes to implementing environmentally clean policies regarding the energy sector as it is the number one air polluter globally, producing more than 80% of green-house gas emissions.

“Cole power plants are extremely environmentally dangerous. There is a significant dependence on coal power plants in the WB region”, Kopač reminded and said that one of the solutions would be installing filters in the power-plants, as well as introducing tax for CO2 emissions, as they do in the rest of European countries. That way air pollution and overall environmental contamination would reduce, but the problem of implementing these solutions comes down to absence of political will in the region.

When it comes to battling climate change on an individual level, although we can all do a lot to decrease our personal consumption, the most important thing remains changing the policies. This in his opinion is a huge problem which if not tackled with policy soon, will only get worse.