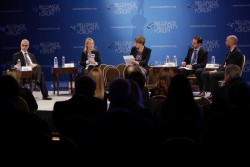 The special event panel “Enlargement moving beyond Europe’s fatigue and bilateral disputes” was presented by Ivana Dragičević. She started the discussion by asking if the enlargement is still on the EU’s agenda.

Ulrike Lunaček, member of the European Parliament, address the participants at the beginining of the Panel.

Catherine Wendt began by saying that the enlargement hasn’t stopped, that this process was going, but there are different approaches to it. “Pure enlargement, enlargement for its own sake is over”, she said. Now, according to her, there is “complex enlargement”. But, “to keep in mind, statement of fact, the process of enlargement is going”. This change of view of the enlargement process has happened, on the one hand because of the crisis and internal problems of the EU, and on the other hand because the EU more and more is focusing on fundamentals, on key areas, e.g. rule of law, corruption, etc. These topics should be tackled in the beginning.

Nikolaos Tzifakis said that the Brexit will consume much energy in the next few years. Also, the Eurozone crisis is not over and the EU countries are consumed with the rise of populism. However, according to him, the enlargement process is part of the strategic documents of the EU. “Accession is embedded in the EU security agenda’’, he said.

What the Western Balkans countries should do, according to Mr Tzifakis, is that they should see themselves in the driver’s seat; they should not wait for the EU. “They should take initiatives”, he said. He stressed the fact that in the Berlin process with six Western Balkan countries, few other EU countries have participated. “The challenge for the future”, he said, “is to get everybody on board”. This should be done because in the end every member state needs to vote for the accession of another state. The member states haven’t been involved. “There is a need to engage”, he concluded.

Direct and to the point in his words and statements was Goran Svilanović. He took his point from what the Serbian PM Aleksandar Vučić, said last year at the Belgrade Security Forum. Vučić said that his task was to make sure that in 4-5 years Serbia is ready and to use the accession process to reform the country.  Svilanović emphasized the economic aspect of the process as its most important one. “Use the opportunity that has been given to improve people’s life”, he said. People need to see that there is an opportunity to improve. This is what is about the Berlin process, he said. “No big stories, focus on what can be done, agree on cooperation on technical level”.

He demanded from the Western Balkan states not to make fancy plans, rather to focus on the concrete things. He recommended the implementation of free movement of labour inside the region, the recognition of university diplomas between the countries, etc. These steps would improve the economy.

Srđan Cvijić observed a phenomenon in the region in the last years: the backsliding of democracy. According to him there are problems in Macedonia, in Serbia, in Kosovo. “We have to see where we are. The transformative power of EU in the region is in free fall”, he said. There is stagnation and backsliding in the democratic standards in the countries of the region. He stressed the fact that there elections weren’t really free and the corruption is widespread. “What has been achieved until now in the Balkans is not irreversible”, he said.

Ivana Dragičević asked the participants about the youths in the region referred to as “the people of tomorrow”. Youth in the region is suffering high unemployment and radicalization in some parts of the region. Svilanović said that there was not much being done in this respect. “We are not doing enough, and I am very sorry”, he said.

He emphasized the fact that many young people from the region emigrate. “The best are just leaving”, he said, “and the numbers are very high”. What we were left with, Svilanović said, were unemployed young people and radicalized and they, in his words, were rightly radicalized. “What people care about for is employment, employment, employment”, he said, “and not just the youths”. Even employed people are afraid of losing their jobs. Catherine Wendt also stressed the youth emigration and said that “we need to make the region attractive for the people to return”.

All the participants in the panel addressed the fact that there is a PR problem in the region with regards to the EU. “The EU does things in the Balkans” Srđan Cvijić said, “but they are not good in communicating them”. According to Ms. Wendt, not just the EU should communicate more with the people in the region, but also the leaders of the countries should communicate more and explain to the common people what the EU does in the region. Mr. Cvijić said that the civil society in the Western Balkans needs to do “megaphone diplomacy”.

Asked from the audience about the return of the geopolitics in the region, about the other players like Russia, Turkey and China, Goran Svilanović said that their investments were welcomed, but they should be done according to the standards agreed with the EU. “We don’t say no to the money”, he said. “The region is going to EU and investments from other countries are welcomed”, but Cvijic asked: why have other players in the region returned? Because, he answered, the EU was not so present anymore.

Asked by Ivana Dragicević to go “beyond the rainbow of the fatigue”, Tzifakis said that now on every subsequent accession will be more difficult. “The countries in the region see the accession as a moving target”, he said.