Participants of the expert panel discussion made a consensus on the need to make more opportunities for civilians to take part in missions, as well as the need that the countries realise that the military force is not working when working on solving every conflict. 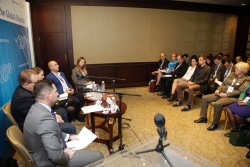 There is a need to raise awareness about the benefits of the active participation of the civil sector, and to see it from a different perspective as a tool for development of foreign policy. Also, it is important to understand that the nature of the conflicts are changed and that in order to overcome them, every country needs to rely on their own legacy and to work on  developing regional cooperation.

The opening speech was delivered by Col. Katarina Štrbac, who said that the government has an active role when it comes to participating in peace operations. She emphasized that the Serbian government has a strong impact on peace keeping in the world and that the government supports the NGO sector. She said that Serbian military forces are currently participating in 11 peace operations. Col. Štrbac added that the regional cooperation is the most important and that Serbia is open for developing it.

Mr. Bega said that main goal of the OSCE mission Ukraine is to reduce tensions and to implement main organization principles. He said that the missions is facing with the frustration and anger of the people who are directly affectet with the conflict. Mr. Bega emphasized the need to add financial and political support, as well as the need for civilian experts in missions.

Mr. Dworack stated that the EU needs to  enhance civilian capacitices. He things that the main challenge is the implementation and that the conflicts are fragmented so there is a need for different professions added to missions.

Ms. Pulko said that Slovenia is a small country with a strong will to participate in peace missions, but the problem is the implementation.

Mr. Bosanac gave not so optimistic point of view, by stating that the UN has lost their role in the current conflicts and that there is a rising trend of adding military and not civilian specialists to active missions. He added that there is a countinuous growth of number of the contries that are „pushing for military solutions“.