Session Propaganda and Strategic Communications: Experience of EU and Višegrad Countries saw the moderator alongside three speakers presenting and discussing their work and expertise on propaganda, disinformation campaigns and strategic communications systems. The panel was concluded with the recommendations that the problems and issues that have emerged on this topic must not be ignored as it is very possible that a situation similar to the one facing Ukraine can occur elsewhere.

As such, there is a need for further development of strategic communications. Social media must be used by the representatives and politicians in the EU in order to communicate shared European values and create ways in which the different countries can relate to each other.

Andrej Matišák, the moderator of the panel, discussed the challenges faced by journalists when trying to distinguish between the different types of sources. This is an interesting topic that is now coming more into the spotlight and has received much attention from governments and policy makers. Mr. Matišák concluded that the instances of propaganda and disinformation campaigns have shown new perspectives on how media is operating these days and how people perceive media.

Ambassador Daniel Schaer discussed the challenges that Estonia has faced in the realm of Russian propaganda and disinformation campaigns and the policies, projects and tools which the policy makers have used to respond to this threat. Ambassador Schaer recommended that the ability for democratic values to withstand the efforts which try to redefine them must be strengthened and that the power of these values for peace and security in the region must be appreciated. That counter measures against propaganda must be taken while working alongside civil society to create good strategies for communication. That the EU, member countries and policy makers must be self-critical as it can be seen from the rise of the far right in the EU that the shared values have not been explained and communicated to their full extent to the electorate. 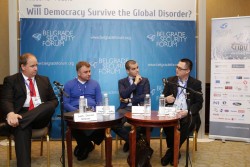 Ruslan Deynychenko discussed the work of his organization StopFake and the ways in which propaganda can be debunked. Hediscussed the balance that Ukraine had held between the West and Russia, the fact that there was a significant underestimation of the influence that Russian media and propaganda had in Ukraine and the success of a media literacy campaign throughout the country. Mr. Deynychenko emphasized that propaganda and disinformation are reported in many countries due to a number of reasons which include a lack of wages, not fact-checking, and a lack of professionalism as such it is important to teach journalism students and train journalists adequately around these topics.

Jakub Janda discussed the work of the European Values Think-Tank which focuses on several issues one of which is defending the Czech democracy against hostile activities. Mr. Janda pointed out that the hostile activities in this realm faced by Western Europe come 50% from ISL and 50% from Russia while in Central Europe the split is 10% ISL and 90% Russia and that these statistics are important to keep in mind when dealing with propaganda and disinformation in the EU. Mr. Janda also cautioned that the EU must keep in mind and be aware of the Trojan Horses used by Russia in the EU and that Russia is trying to build up support for the Putin regime within the Russian minorities in the Baltic States through the use of propaganda and disinformation.