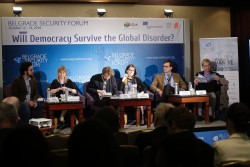 The Academic Panel 1 titled Migrant and Refugee Crisis: Contesting the EU Normative Power, was opened by moderator Nemanja Džuverović. After four presentations given by the authors of academic papers selected, the discussant Ralph Wilde posed questions to be answered at the end of the session.

Daniela Irrera focused on the role of NGOs in search and rescue operations in the Mediterranean. She said that NGOs take a more active role, facing the emergency, instead of just giving assistance to migrants, integration and promotion of return to their home countries. The preliminary conclusions of her research are that several differences exist between the big NGO community – in their approach to problems and at times ideological and political divergences and that there is a growing interplay between service-oriented NGOs and a more practical role. Irrera admitted that her research is European oriented and that she had already done a broader research EU and UN oriented.

Julia Himmrich’s research highlighted the relationship between EU enlargement, asylum and pressures on the domestic system of member states. She stressed that the question of migration and asylum is very important to the relationship between the EU and Western Balkans, as member states were trying to save their own borders and the Western Balkans are essentially a region of transit into the EU. She highlighted two approaches: shutting down the Western Balkans route and the EU-Turkey deal. “The German Government has seen Eastern Europe as a buffer zone for the migrants”, she reminded.

Stevan Tatlovic was the third speaker and his presentation was related to Fortress Europe and ‘gated communities’. He pointed out that the refugee crisis is no longer understood as separate from the terrorist crisis. The main conclusion of his presentation was that we should reach a ‘dissensus’.

Leonhard den Hertog explained the role of international organisations in the EU funding. “The usual conceptualization of the relationship between international organisations and European Commission is that EC has money and IOs have implementation capacity”, he said and added that the IOs are involved in the entire EU Funding Cycle. However, there are increasing pressures for IOs to reconcile. Wilde discussed the approach EU takes in funding the world mediating agency.