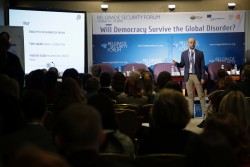 Sonja Stojanovic Gajic, Director of the Belgrade Centre for Security Policy, gave the welcoming speech to the Academic Event of the 6th Belgrade Security Forum. The overall topic of this year’s Academic Event is “Migration, Security and Solidarity within Global Disorder”. She addressed the audience on behalf of the Forum organizers – Belgrade Fund for Political Excellence, European Movement in Serbia, and Belgrade Centre for Security Policy. 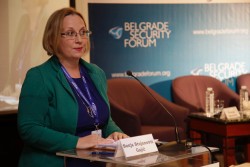 Ms. Stojanović Gajić pointed out that the Academic Event is a unique feature of this event and that forums do not usually provide space for the academics. She believes that the voice of the academic community has to be heard if are to make responsible decisions regarding policy issues. “We can’t react responsibly before we have had time to think”, she said. Also, social sciences can provide deeper insight into important policy issues, such as the migrant crisis and academics and policy makers have to partner up if they are to shift from delivering ideas to delivering action.

The welcoming speech was followed by the keynote speech given by Sergio Carrera, Senior Research Fellow and Head of the Justice and Home Affairs Programme, Centre for European Policy Studies (CEPS). Mr. Carrera started off by saying that the migrant crisis “brings us to the core of who we are” and that it poses a question of whether democracy can withstand the challenges of our times.

He warned that the responses to the migrant crisis had so far been based mostly on fear and irrationality and pointed out that, instead of that, social science research must serve policy making with information. Mr. Carrera went on to present the key facts on the migrant crisis. First of all, he noted that the size of the challenge was being misrepresented. For example, the number of people entering Turkey has decreased, while the number of people entering Italy has been steady during this year. Similarly, the number of asylum applications in 2016 is similar to that in 2015.

Mr. Carrera characterized the instruments used within the EU’s responses to the migrant crisis as rapid, flexible, and non-legally binding. He highlighted the growing negative trend of criminalization of asylum seekers and the act of framing them as irregular or illegal immigrants. One of the priorities of the responses is also to frame the countries of origin as safe even when they are not, in order to advocate for the return of the migrants. He pointed out that for example, the decrease in the number of entries, can be seen as an indicator of efficacy of such responses – “but at what cost?”.

“We have to ask ourselves if the responses are supporting the democratic rule of law and the fundamental rights of the individual. Are such responses causing deeper political instability and insecurity and compromising the capacity of the European countries to deal with the migrant crisis?” he argued. His conclusion is that the EU’s populistic actions are merely “feeding the monster” and that a different response is possible.