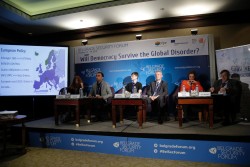 The speakers of the second panel of the Academic Event titled Looking beyond Migration: Challenges to Integration in Host Countries concluded that policy issues regarding the integration of migrants was a complicated intersection of different perspectives.

Ms. Piotrowska acknowledged that a shift should take place from the dominant European perspective to the Turkish one. She introduced the concept of “ontological security”, which presents a novel way of looking at state security, conceptualizing it as a tendency to maintain stability. As she said, at one hand, Turkey fosters its ontological security by hosting refugees (eg. its international image as a gatekeeper in the migrant crisis is preserved). On the other hand, the practice of hosting refugees undermines the physical stability of Turkey as terrorist attacks and protests pose a plausible security threat. Ms. Piotrowska concluded that this clash between ontological and physical security was crucial for understanding the refugee measures undertaken by the Turkish government.

Mr. Bazzani argued that the reason for the poor state of the refugee reception mechanism in Italy is not solely corruption and clientelism; the decision making process of the policy makers should be taken into account as well. He investigated the position adopted by the policy makers, how their duties and expectations translate into daily practices of accepting refugees, and how economic theories can affect their decisions. Mr. Bazzani singled out factors that shape policy makers’ beliefs, such as the public opinion (“Nobody wants to hear about refugees”, “Nobody wants them close to their home”) or the limited and fixed funding. He pointed out that many recent public policies have been opening up to the logic of neoclassical economic rationality. Mr. Bazzani finished by presenting alternative refugee reception projects, based on self-management and openness.

Mr. Gruszczak warned that the migrant issue has been (ab)used as a political tool – the issue has been securitized regardless of the factual background. In the case of Poland, Mr. Gruszczak suggested that the passage from communism to “unmodernity” is paved with ethno-nationalistic tendencies. In that light, he pointed out that the securitization of the migrant issue and the framing of refugees as “others” or “aliens” had become crucial in order to maintain a separate ethno-nationalist identity of the country.

Ms. Djolai brought up the need to investigate the life of the refugees once they are settled in their host or destination countries, as well as marginalization and exclusion they could be experiencing. “We should switch from numbers to a more segmented approach and adopt the perspective of intersecting inequalities”, she proposed. Ms. Djolai concluded that public policy makers should pay attention to societal perceptions and to the power misbalance which underlies the lack of political participation of the migrant groups.

Mr. Seroka closed the panel by noting that Turkey, Poland, and Italy experience suggests that the migrant issue should be tackled at top levels and not solely at the local level (governed by the EU’s subsidiarity principle). “The migrant crisis needs to be personalized, not objectified”, Seroka said.