At the end of the final day, closing address was delivered by the representatives of the three organising partners: Ms. Sonja Stojanović Gajić on behalf of the Belgrade Centre for Security Policy, Ms. Maja Bobić, European Movement in Serbia, and Ms. Sonja Licht of the Belgrade Fund for Political Excellence. The three of them thanked this year’s speakers, participants and donors, without which the Forum wouldn’t be one step closer to its 5 years jubilee. 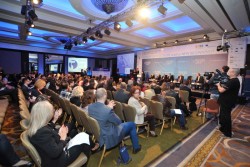 EU enlargement is the policy that best demonstrates European values in practice and therefore it is important to revive it with new commitment of enlargement to the Western Balkans. At the same time, Western Balkan states need to take an initiative to contribute to the debates on new European project, international norms and to strengthening international organisations. Belgrade Security Forum is one of examples of such initiative by three civil society organisations: Belgrade Fund for Political Excellence, European Movement in Serbia, and the Belgrade Centre for Security Policy.

BSF organisers called upon Serbia to take an initiative and engage in debates that matter to Europe during the OSCE chairmanship in 2015. Serbia should contribute to finding solutions for current European crisis by engaging both the EU and Russia in a dialogue. “We expect Serbian authorities to demonstrate partnership approach by relying on support provided in subsequent chairmanships: Swiss that preceded us in 2014 and Germany that will take over in 2016”, Ms. Sonja Stojanović Gajić concluded.