Western Balkans countries need to work on themselves. Only full cooperation between them is the path towards EU enlargement, even if it happens after 5 years, that is the conclusion of the last plenary panel of the Belgrade Security Forum under the title Is It Time For a New Balkans Commission?. General assessment was that the new Balkan Commission would help spread its voice all over the EU. There is a great significance of the 5 years’ enlargement brake period in front of the Western Balkans and it has to be used wisely.

Thessaloniki summit in 2003 confirmed that future of the Western Balkans countries laid in the EU, explained Ms. Hedvig Morvai of the European Fund for Balkan. Conclusions of the Summit showed EU devotion to include Balkan in its membership, and the time is now right to commit to the idea of creating Balkans Commission and show the region preparedness for the EU membership.

Mr. Guiliano Amato reminded all that previous commissions failed to prevent further conflicts and find solution for after-conflict situations. New commission has to be useful in promoting willingness of the West Balkan countries to eventually join the EU, he said. Questions of importance of the future commission, its name and messages it should send, were asked by Mr. Jacques Rupnik. He referred to the differences between official foreign policy of the EU and the public opinion of the citizens about enlargement, policy towards Ukraine, etc. 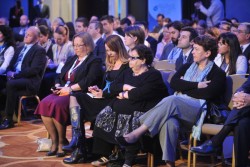 Mr. Dejan Jović dwelled on the possible new Big Bang enlargement after 5 years’ break naming it Balkan Express. His warning to the officials was that the EU might not enlarge, thus options have to be contemplated.

Mr. Goran Svilanović, secretary general of Regional Cooperation Council, underlined that Western Balkans countries have to meet that deadline and become member on the first day after five years period. In his advice to Serbia, Svilanović pointed that it was extremely important not to be the weakest economy among EU 28, the same way Croatia wasn’t the weakest when it accessed. He noted the name of the commission was not important as long as it prepared the states for the accession.

Another interesting advice in order to resolve problems that held back the region on its path towards the EU was given by Amb. István Gyarmati. He mentioned Russia’s influence on the Balkans and underlined the necessity of determination of Serbian foreign policy towards either the EU or Russia. To solve the ongoing issue among the Balkan’s neighbours; Mr. Gyarmati proposed regional cooperation and dialogue.

Special attention to the values shared among the EU member states and their common recognition among all Western Balkan officials was paid by Mr. Vedran Džihić. However, in practice the situation was not always so bright; a huge work on strengthening democracy, regional cooperation, and respect of human rights was still ahead. Mr. Džihić mentioned the democracy fatigue in addition other tiring trends.