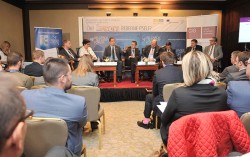 The exact date cannot be foreseen at this particular moment; however it is clear that dragging along for a long period of time will not be sufficient, concluded the participants of the session Kosovo and Serbia – How much longer before normality? Participants stressed as critically important for both Serbia and Kosovo to remain patient and persistent and work together towards the normality.

Marko Đurić gave an opening to the discussion by pointing out that people needed to work and live with each other, and that the best way to achieve this is to finally normalize functioning of the institutions. When it comes to the Belgrade – Pristina dialog, Mr. Đurić firmly emphasized that the goal has not been not to impose own thoughts upon the other side, but rather to stand behind the established goal while cooperating on multiple levels. Moreover, Mr. Đurić concluded that the focus should be on closer cooperation right now, rather than on the date of the final normality.

Ramadan Ilazi pointed out that the process of dialog between Belgrade and Pristina had been a huge achievement in the European Foreign Policy. He also added that normality could only be reached when the two agree to push together and promote peace and justice during the rest of the process. Mr. Ilazi further pointed out that Kosovo had to establish the freedom of movement of goods and services as soon as possible in order to speed up the process of integration in the European Union.

Gordana Čomić warned everyone that there would be no normality until each one of the citizens in Serbia, as well as in Kosovo, realized that the process is something we all wanted to do, not something instructed. Further, Ms. Čomić also shed light on the very strong opposition in Kosovo, which needed to be dealt with in the near future.

In the continuation of the panel, Ljubiša Mijačić explained that Serbian people who lived in Kosovo represented the collateral damage and insisted on the idea of economic improvements in Kosovo, since he strongly believed that only then would Albanians see Serbians as an asset and not as a threat.

Dukagjin Gorani stated that the politics was the art of compromise, rather than the ability to explain what one does not want and at the same time supporting the idea of a drastic change in both governments. More precisely, Mr. Gorani believed that both Belgrade and Pristina needed to move away from the problem of autistic governments.

As the final panelists to state his views on the topic, Samuel Žbogar hardly believed in the idea of giving more attention to the recent history, as well as focusing strongly on the young generations who have been born after the conflicts, yet were filled with negative messages and experiences, inserted by the media and older generations.