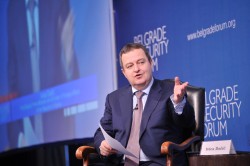 The Grand Opening on Day 2 was followed by a Special Event discussing the improvements made in relations between Serbia and NATO since 2006. After a short introduction by the moderator Ivan Vejvoda portraying overall regional progress with NATO, the focus of the talk was on the excellent partnership between the organisation and Serbia where a membership is not needed when full cooperation is provided.

In his short address, Ivica Dačić praised the substantial advancement in relationship since the signing of the Partnership for Peace PfP agreement ten years ago. Serbian First Deputy Prime Minister and Minister of Foreign Affairs hopes that NATO’s strong presence in the region will continue to contribute to peace-keeping and stability, especially with regards to Kosovo. He specifically singled out the crucial activities provided by KFOR that are garantueeing the implementation of the Brussels agreement, hence, securing the protection of the Serbian population there.

Furthermore, he stressed that Serbia’s military neutrality does not constitute an obstacle in the deepening process with NATO, one again affirming that a membership is not on the table for discussion.

Zoran Đorđević attested that future cooperation is indeed desired, confirming that the decision to join the PfP was a right one. Within those last ten years, Serbia managed to strenghten its defensive power with the help of NATO, improving its reputation on a global level. He concluded his statement with a quote that shall serve as a guidance for the future of the Serbian military: Admit mistakes, benefit from them, correct them.

James Appathurai assured that Serbia has friends throughout the organization. NATO’s objective in regards to Serbia is a strong partnership, practical cooperation, political dialogue – an aim it shares with government of Serbia. NATO membership for Seriba is, as he additionally stressed, not relevant as long as Serbia does not change its firm position on that topic.

Appathurai praised Serbia’s excellent role in UN and EU missions which helped the country to contribute to international operations while at the same time to expand and deepen its expertise in military training and defense education. NATO is therefore more than willing to keep up the partnership that, admittedly, can be extended within its given realms, in particular when it comes to sharing insights and news on critical topics such as regional stability and radicalization.

The discussion closed with an universal understanding that the last ten years have shown tremendous success which is desired to be deepened in more areas, as Dačić concluded: Welcome to Serbia.