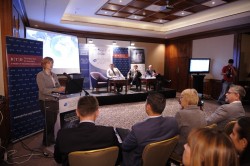 A little more than half of the EU citizens (55%) think the United States should exert strong leadership in the world affairs, while the US desire for stronger EU leadership has declined (from 63% in 2012 to 57% in 2013). For the majority of Americans, Asia has more importance than the EU, while China is perceived as more of an economic threat than opportunity, according to the people on both sides of the Atlantic (USA, EU and Turkey). These were just some of the key findings of the annual Transatlantic Trends survey, conducted by The German Marshall Fund and presented at the Belgrade Security Forum.

The report was presented by Biljana Dakić Đorđević, program officer in Balkan Trust for Democracy. When it comes to the transatlantic security, NATO is still perceived as essential (58% Europeans and 55% Americans) and perceived as a “community of democracies”. However, asked about the future of the EU-USA partnership, some countries, including France, Italy and Spain, were in favor of a more independent approach. Desirability of the interventionist policies is also strong on both sides of the Atlantic: the majority of people in the EU (72%), US (62%) and Turkey (62%) said their countries should completely stay out of the conflict in Syria, which implies an increase in non-intervention attitudes compared to 2012. In addition, while Italy strongly prefers democracy over stability in the Middle East, Romanian citizens strongly oppose any imposition of democracy in that region.

Apart from the security, the survey also covered public opinion on the governments. Many Europeans reported negative views of their own governments, particularly in Spain, Italy, Portugal and France. According to the survey, Angela Merkel is less popular in Europe than the last year, but still more popular than other governments in her handling of the economic crisis in Europe. There is also a significant amount of disapproval of the economic policies in Spain (79%), Poland (75%), France (74%) and Portugal (70%).

Asked to give his reflection on the transatlantic relations, Matthew Palmer, political counselor in the US embassy in Belgrade, pointed out the importance of the relations with the US. “Although Asia is seen more and more as the new BFF of the US, that is really not true at all. Transatlantic relations still remain vital to the US and essential for the global conversation on security”, Palmer said.

Srdjan Bogosavljevic, director of Ipsos Strategic Marketing agency, made a comparison between the survey data and the situation in Serbia, and said that threats in Serbia were not the same as those perceived in EU. Regarding the Serbian views towards NATO, he said that “80% of Serbs still see NATO as negative, and continue to have a positive view of Russia”.

As for the Serbian public opinion of the government and politicians, Bogosavljevic stated that people from Serbia view all politicians negatively, except from two politicians that are seen positively. “Aleksandar Vucic and Dragan Markovic Palma are viewed as positive because they manage to convince people they do what they promise”, said Bogosavljevic.

Transatlantic Trends is an annual survey of public opinion held in the 13 countries (USA, Europe and Turkey) and it aims to provide valuable information for policy makers, media, think tanks and academics.