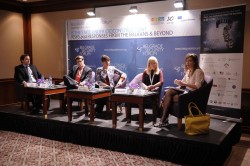 The first panel in the Academic session saw a discussion on new trends of transformation of diplomacy in international security.

The first panel in the Academic session was dedicated to the subject of transformation of diplomacy in the context of international security and the EU diplomatic practices. The panel was chaired by Filip Ejdus, Member of the BCSP Management Board and Lecturer at the Faculty of Political Sciences, University of Belgrade.

The discussion questioned the (un)changing diplomatic practices by using practice theory as the analytical framework. Maja Ruzic, Teaching Assistant of the International Security Studies at the Academy of Criminalistics and Police Studies, and Jelena Cupac, a PhD researcher at the European University Institute in Florence at the Department of Political and Social Sciences, examined the EU mediation practices in three different instances of EU negotiation – Indonesia and the independence movement, Russia and Georgia and Kosovo and Serbia. Authors pointed to the 3 groups of factors – hubrises – that are influencing EU diplomatic practice.

Marcus Holmes, Assistant Professor of Political Science at Fordham University in New York, discussed the role of traditional (face to face) diplomacy vs. e-diplomacy. He concluded that traditional diplomacy still plays an important role, but also that the e-diplomacy is getting increasingly important. He stressed the importance of platforms like Twitter that enables politicians to “keep their ear on the ground” and track how policy-changes affect the public more directly. Twitter also symbolizes the change in our processing of complex information. Due to our cognitive limitations, we increasingly rely on technological tools for helping us understand political processes and events better. The technology could be further used as a didactic tool for processing and presenting large quantities of complex data.

In the discussion segment, Ejdus asked Holmes how governments can effectively influence citizens over social networks when only a fragment of electorate is following them. Holmes pointed out that government listening to the people is more important than government influencing people over social networks. By listening to the active communities, governments can properly react to the changes in the electorate and act accordingly.

In a follow up to the keynote speech subject Cross answered a question about the importance of informal cooperation of government officials through security forums. Cross said that the forums are a good place for cultivating epistemic communities by bringing government and civic society experts together.