Belgrade Fund for Political Excellence, Belgrade Centre for Security Policy and the European Movement in Serbia are organizing the fourth Belgrade Security Forum that will take place from September 30-October 2 2014 under the working title ” Europe 2014: Closure and/or New Beginning?”

The years 1914, 1939 and 1989 have been the cornerstones of the 20th century. Never before has one jubilee in such a symbolic way encompassed the history of a century as that of the beginning of the “age 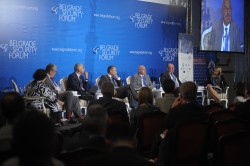 of extremes” as Hobsbawm referred to it. The fall of the Wall in 1989 seemed to mark the end to threats and divides brought by this century of war and destruction, which started with WWI and concluded with the end of the decades-long Cold War. Yet a quarter of a century after this glorious peace display, essential issues of Europe’s security and the security of the region are re-opened. Is this symbolic 100-year anniversary of WWI a sign of the end of European divides, or does it mark the beginning of new ones? Are security threats and problems we face still the same, or should we define new social phenomena that the globalized world brought along?

The conference will host panel debates on various topics related to global and European security challenges, particularly within the framework of the 100th anniversary of the beginning of the First World War. Among other issues, renowned participants will examine to what extent the IWW anniversary can be considered as a closure/new beginning of the historical and integrative discourse in the Western Balkans and Europe, and discuss about dilemmas of the enlargement in the line with the 10th anniversary of the Big-Bang Enlargement. Particular attention will be given to the recommendations issued by the International Commission on the Balkans in 2005 and the broader (dis)integrative context and policies in the Western Balkans and Mediterranean area.  As was our aim for the last three years, most of these panels will try to examine the transformation of the Balkans from a security problem to a security partner and bring forward the opportunities and lessons learned from this process.

Following the best practices from the last three years, the academic part of the Forum will be organized for emerging young researchers and leaders on 30 September, under the title: Usable Past, Collective Memories and International Security. 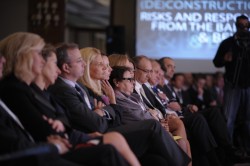 The year 2014 marks 100th anniversary of the First World War, quarter of a century since the end of the Cold War and a decade since the Big Bang enlargement of the EU. As such, it represents a good opportunity to reflect on the role of collective memories in world politics. The academic event aims to discuss how collective memory is implicated in contemporary security practices and discourses. Instead of looking at how past events have influenced the present, we are interested in how is the past used and misused to inform security representations and shape security policies. Specific attention will be paid to the use of historic analogies and lessons learns in security policy making as well as the culture of remembrance by and within security institutions – military, intelligence and police. We welcome contributions that work at the intersection of security studies and sociology of memory in order to shed light on the importance of collective memories for theory and practice of international security.