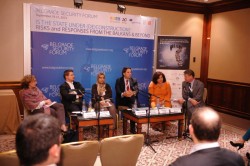 This session addressed the recent security challenges defining the neighboring region along the EU southern and eastern borders, particularly within the trajectory of the ongoing conflicts in Syria and Egypt.

It was highlighted that the EU still faces structural and political weaknesses to cope with the newly-emerging and/or prolonged security shortcomings in the greater Mediterranean region, largely due to the member states` failure to build consensus on numerous areas. Specifically, it was noted that European approach remains highly divided regarding the issue of the irregular immigration, which has been recognized a serious destabilizing factor, in Greece in particular.

Moreover, it was pointed out that the EU has to modify its approach, not only towards the Middle-East but the North African states. It was recognized that very much contrary to their initial defined goals, EU policies have more facilitated the division of the region than integrating it.

Overall, it was concluded that the EU urgently needs to develop a more coherent, cohesive and comprehensive policy agenda within the framework of its European Neighborhood Policy and Euro-Mediterranean Partnership.